Padres extend win streak to 4 with victory over Pirates 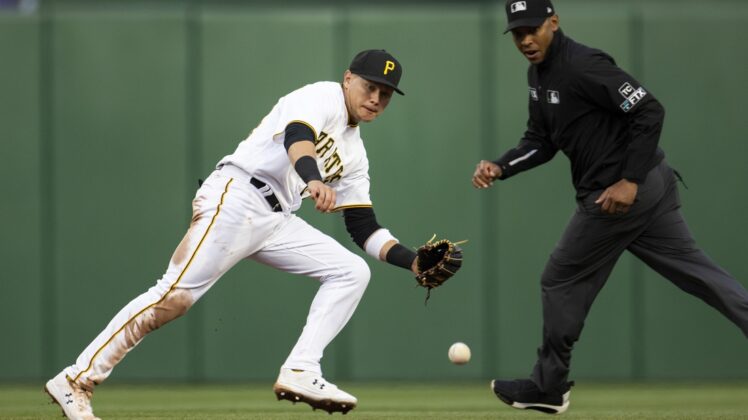 Ha-seong Kim, Jake Cronenworth and Trayce Thompson drove in two runs apiece and Yu Darvish pitched six innings despite being struck in the thigh by a 105-mph line drive Friday night as the visiting San Diego Padres scored a 7-3 win at the Pittsburgh Pirates.

The win stretched San Diego’s winning streak to four in a row.

Kim’s two-run homer in the third erased a 2-0 Pittsburgh lead. Cronenworth broke the tie in the top of the fifth with an unusual RBI single. The bases were loaded with one out when the Padres’ second baseman hit second base umpire Jeremie Rehak with a line drive — creating a dead-ball single. Manny Machado followed with a sacrifice fly to make it 4-2.

Thompson, making his first start since being recalled from Triple-A El Paso, hit a two-run single in the sixth and Cronenworth homered off Sam Howard in the seventh.

The Pirates scored twice off Darvish in the first. Bryan Reynolds drew a one-out walk and moved to third on Ke’Bryan Hayes’ single. Daniel Vogelbach drove in Reynolds with a single off Darvish’s glove and Diego Castillo singled home Hayes.

The Padres tied the game in the top of the third. Trayce Thompson drew a one-out walk from Zach Thompson. Kim followed with his second homer in three games — making him 6-for-11 in three games on the road trip with two doubles, two homers and seven RBIs.

Beaty drew a walk from Zach Thompson to open the Padres’ fifth and moved to second on Kim’s single. Aaron Fletcher replaced the Pirates starter and hit Trent Grisham to load the bases. Cronenworth then singled to shortstop, scoring Beaty.

Vogelbach had his second RBI single in the bottom of the inning to pull the Pirates to within a run at 4-3.

Darvish (2-1) gave up three runs on eight hits and a walk with five strikeouts in six innings to get the win. Taylor Rogers entered with two on and one out in the ninth to get his third save in as many games and his eighth on the season. Zach Thompson (0-3) gave up four runs on three hits and two walks with three strikeouts in 4 1/3 innings to take the loss.