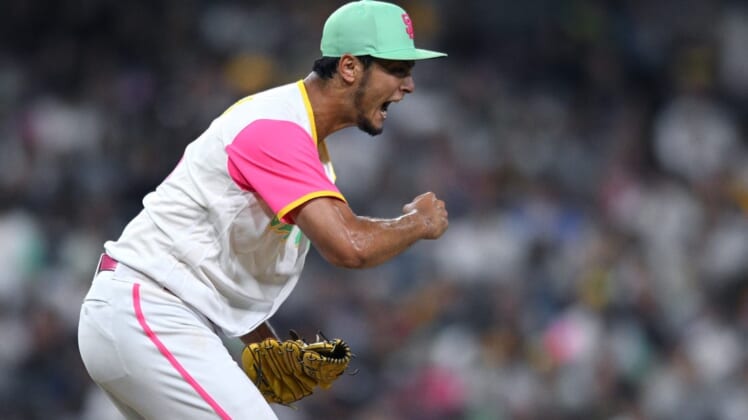 Austin Nola put the Padres ahead with a two-run double in the second inning and Yu Darvish allowed three runs over seven innings Friday night as San Diego defeated Madison Bumgarner and the visiting Arizona Diamondbacks 5-3.

Bumgarner is 0-3 against the Padres this season and hasn’t beaten San Diego as a member of the Diamondbacks.

Darvish (8-4) gave up three runs on five hits and two walks with nine strikeouts on a season-high 114 pitches over seven innings. He gave up a first-inning homer to Ketel Marte and a two-run homer to Christian Walker in the fourth.

Struggling Padres’ closer Taylor Rogers pitched a perfect ninth to pick up his 25th save.

The Padres scored three runs in the second and two runs in the third against Bumgarner (5-9), who gave up five runs (four earned) on eight hits and four walks with three strikeouts in five innings.

A throwing error by Arizona third baseman Josh Rojas allowed Luke Voit to reach first base and opened the door to the Padres’ three-run second. Ha-Seong Kim singled to put runners at first and second.

Bumgarner rebounded by striking out Eric Hosmer, but Nola plated both runs with his double to left field. Singles by Nomar Mazara and Esteury Ruiz scored Nola.

Jurickson Profar, who was activated from the concussion injured list before the game, walked to load the bases. But Arizona catcher Carson Kelly picked Mazara off third, and Bumgarner struck out Jake Cronenworth for the final out.

The Padres opened the third with three straight singles off Bumgarner by Manny Machado, Voit and Kim to make it 4-1. Hosmer drew a walk to load the bases, and Voit scored when Nola grounded into a double play.

Marte’s homer in the first was his eighth of the season. The Padres were ahead 5-1 when Marte opened the fourth with a single and came around on Walker’s 22nd homer of the season.

The Padres ended a three-game losing streak, and they are 8-2 against the Diamondbacks this season.