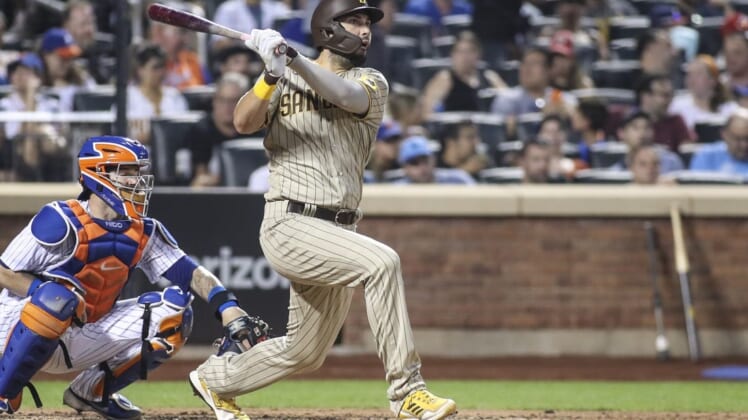 Manny Machado hit a two-run homer one pitch after a borderline two-strike pitch was called a ball Saturday night for the visiting San Diego Padres, who locked up a series win by beating the New York Mets 2-1 in the middle game of a three-game set.

The Padres have won four of five following a 6-14 stretch. The Mets, whose 10 ½-game lead over the Atlanta Braves in the National League East was whittled to 1 1/2 games entering Saturday, have dropped three straight — just their second three-game skid of the season.

Starters Blake Snell and Chris Bassitt matched zeroes until the top of the sixth, when Bassitt (7-7) sandwiched strikeouts of Ha-Seong Kim and Jake Cronenworth around a single by Jurickson Profar. Bassitt promptly got ahead of Machado 0-2 before a pitch that appeared to land in the upper part of the strike zone was called a ball by umpire Jim Wolf.

Machado homered to left on the next pitch.

The round-tripper put Snell (2-5) in line for the win. The left-hander gave up four hits and walked two while striking out five over five innings. He had just one 1-2-3 inning but stranded a runner in scoring position in each of his final four frames.

Nabil Crismatt, Adrian Morejon and Luis Garcia combined on three innings of two-hit relief before Taylor Rogers earned his 28th save despite allowing a run in an eventful ninth. Rogers gave up a leadoff single to Pete Alonso and issued a two-out walk to Luis Guillorme before J.D. Davis followed with an RBI bloop single. Rogers then induced Tomas Nido to pop out to Cronenworth at second to strand the potential tying run, Travis Jankowski, at third.

Bassitt took the hard-luck loss despite allowing just four hits and walking none while tying a career high with 11 strikeouts. He also recorded 11 whiffs for the Oakland Athletics against the Detroit Tigers on Sept 7, 2019.

Bassitt retired the first 12 batters he faced — six by strikeout — before plunking Nomar Mazara. One out later, Eric Hosmer singled for the Padres’ first hit.