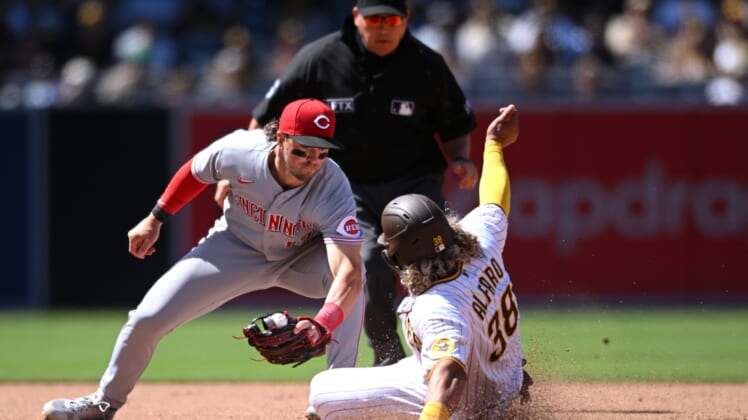 MacKenzie Gore picked up his first major league win with five scoreless innings and Jurickson Profar and Ha-Seong Kim homered Wednesday afternoon as the San Diego Padres completed a three-game sweep of the visiting Cincinnati Reds with a 6-0 shutout.

The win was the Padres’ fourth straight. The Reds have lost nine in a row and have gone 81 innings since they last held a lead after a complete inning.

Left-hander Gore (1-0), the Padres first-round pick (third overall) in the 2017 draft, allowed four hits and two walks with seven strikeouts. Steven Wilson, Pierce Johnson, Luis Garcia and Dinelson Lamet each followed with a scoreless inning to give the Padres their second shutout of the season.

Profar gave the Padres a 2-0 lead in the bottom of the fourth with a two-run homer after throwing out Joey Votto at the plate in the top of the inning. Manny Machado was hit in the back by a Gutierrez pitch leading off the fourth and scored on Profar’s fourth home run of the season — a drive into the right field seats.

Jorge Alfaro was hit on the hand by a Gutierrez leading off the fifth. The catcher stole second and scored on Trent Grisham’s double into the right field corner.

Kim homered to left off Reds reliever Buck Farmer with one out in the seventh. The Padres added two more in the eighth off Hunter Strickland on a sacrifice fly by Alfaro and a double by C.J. Abrams.

The Reds almost took a 1-0 lead in the top of the fourth. Votto singled with one out and moved to second when Nick Senzel drew a walk from Gore. Colin Moran then lined a single to left, but Profar fired a strike to Alfaro, who easily tagged out Votto at the plate.

The Padres outscored Cincinnati 16-3 in the series. The Reds, who had five hits with 13 strikeouts Wednesday, went 16-for-96 in the series with 31 strikeouts.