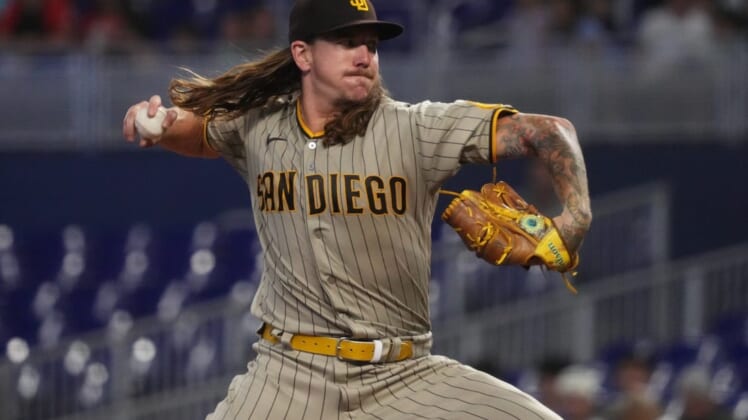 Call it a missed opportunity.

The San Diego Padres just finished a run of 13 straight games against teams with losing records and went 7-6.

“That’s behind us,” manager Bob Melvin said of the Padres. “You can’t do anything about that. We need to concentrate on each day and winning games.”

But starting Tuesday in a two-game series against the American League Central-leading Cleveland Guardians, the Padres’ path gets a lot steeper.

First, the Padres go on nine-game road trip to Kansas City, San Francisco and Los Angeles for a meeting with the Dodgers. The last stop on the trip will be the first of three series against the Dodgers over the final five weeks — and one of six series against playoff-contending teams.

The good news is that 18 of the Padres’ final 27 games are at home. The bad news is that the Padres are only 35-26 at home, where they are averaging less than four runs a game with the fifth-lowest home slugging percentage (.369) in the major leagues.

Meanwhile, 25 of the Guardians’ remaining games are against teams in the muddled American League playoff picture — including eight with the Minnesota Twins, who trail the Guardians by only 1 1/2 in the AL Central.

“It’s that time of year,” Guardians manager Terry Francona said recently. “This is where you strive to be early in the season, reaching that point where each game carries a little more importance.”

This is the second two-game series between the Padres and Guardians. Earlier this year, they split a May 4 doubleheader in Cleveland after a rainout.

Civale will be facing the Padres for the first time in his career in his 15th start of the season. He was on the injured list from July 14 until Aug. 10 with a sprained ligament and inflammation in his pitching wrist.

In two starts since his return, Civale has allowed three runs on six hits and a walk with 14 strikeouts over 10 innings. Both those starts were against the Detroit Tigers, and Civale had a season-high 10 strikeouts over six innings in his most recent outing on Aug. 15.

Clevinger came to the Padres from the Guardians in August 2020 in a trade that sent Cal Quantrill, Owen Miller, Josh Naylor, Austin Hedges, Gabriel Arias and Joey Cantillo to Cleveland. After helping the Padres reach the playoffs in the pandemic-shortened 2020 season, Clevinger had Tommy John surgery and missed the entire 2021 season.

He is 2-1 across his last five outings after a personal three-game losing skid. In his most recent start, he went just 4 1/3 innings against the Miami Marlins on Wednesday while allowing three runs on six hits in a no-decision.

Control has been an issue as of late, as Clevinger has walked eight across his last 9 1/3 innings.

The right-hander only has one career start against the Guardians. He faced them back on May 4, allowing three runs and four hits to go along with three walks and four strikeouts in 4 2/3 innings.