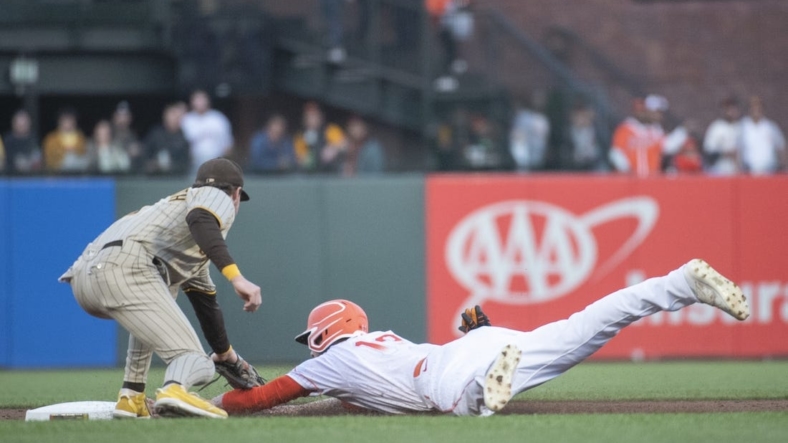 Manny Machado collected a double, a single, an RBI and a run, helping the Padres double up on Monday’s 6-5 win in San Francisco with a second straight nail-biter in a duel of National League playoff contenders.

The win, coupled with a second consecutive Philadelphia Phillies loss at Arizona, allowed the Padres to move within a half-game of the Phillies for the NL’s second wild-card spot.

Meanwhile, the Giants fell into a tie with the Diamondbacks, 9 1/2 games behind the Padres in pursuit of the final postseason berth in the NL.

In beating the Giants for the second time in three duels this season, Snell (6-7) paved the way, limiting the hosts to four hits in his six innings. He walked three and struck out eight.

Snell left after 105 pitches with a 4-0 lead, thanks in large part to a pair of critical Giants errors.

The first occurred in a scoreless game in the sixth when, with two outs, Brandon Crawford threw wildly to first base while trying to prevent an infield single by Machado. The error allowed Machado to reach second, and he then scored the game’s first run on a single by Josh Bell.

Giants starter Logan Webb (11-8) was pulled at that point, charged with just the unearned run on four hits. He walked one and struck out seven.

Grisham’s homer, his 16th of the season, came off Giants reliever Tyler Rogers in the seventh inning, following an error by third baseman J.D. Davis that allowed Ha-Seong Kim to reach base.

The visitors made it 4-0 later in the inning with a third unearned run, on doubles by Jurickson Profar and Machado.

The Giants took advantage of an errant throw by Padres reliever Luis Garcia to get on the board and close within three in the eighth. But Garcia avoided further damage.

Nick Martinez, called upon again after a 1 1/3-inning stint the night before, retired Evan Longoria for his eighth save after Joc Pederson belted his 20th homer, a two-run shot.

Grisham, Machado and Profar had two hits apiece for the Padres, who have won four of five.

Pederson, who came off the bench, had two hits and scored twice, while Wilmer Flores collected a pair of singles for the Giants, who were out-hit 9-7.