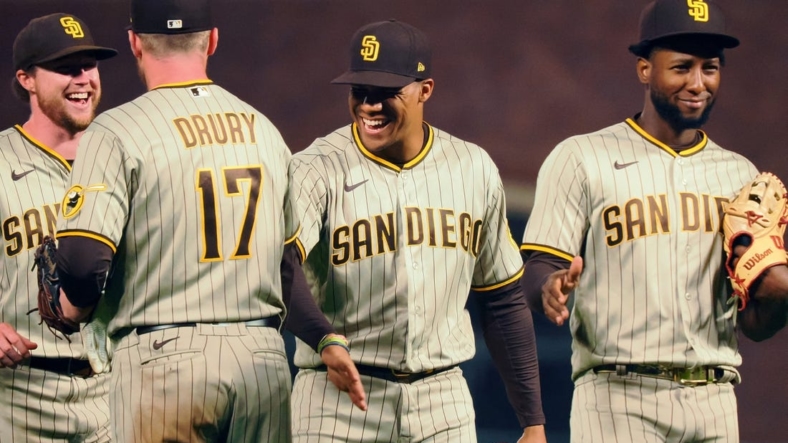 Two pitchers attempting to rebound from low points in their season are scheduled to clash Tuesday night when the San Diego Padres go for a second consecutive win over the host San Francisco Giants.

Mike Clevinger pitched the Padres to a 6-2 lead, and Nick Martinez saved the day after the Giants had closed within one, enabling San Diego to hang on for a 6-5 triumph in the series opener Monday.

A ninth win in 14 head-to-heads with the Giants was doubly important for the Padres, who moved within 1 1/2 games of the Philadelphia Phillies for the second wild-card playoff spot in the National League. The Padres also extended their advantage over the Giants to 8 1/2 in their battle for the league’s final postseason berth.

If there was a negative in the Padres’ win, it was that they had to extend Martinez 27 pitches in order to record a four-out save. Martinez has pitched in back-to-back games just once this season, that coming after a one-inning, 19-pitch outing earlier this month.

More likely, Padres manager Bob Melvin would have to trust Josh Hader should a save situation arise Tuesday, and that could be problematic. Hader has appeared in seven games since being acquired from the Milwaukee Brewers on Aug. 1, pitching to a 23.14 ERA.

“Just working through it,” Hader said of his slump. “You are going to have good ones and bad ones. Trust the process.”

Tuesday’s scheduled starter for the Padres, Blake Snell (5-7, 4.24 ERA) also has had issues of late, if not at Hader’s level. The left-hander is coming off his worst outing of the year Wednesday, when he was battered by the Cleveland Guardians for six runs and eight hits in just 3 1/3 innings in a 7-0 home loss.

For his career, Webb has gone 2-1 with a 3.14 ERA against the Padres in eight games (seven starts).

There’s a good chance Webb will find himself throwing to backup catcher Austin Wynns as starter Joey Bart had to leave the series opener after getting hit in the mask with a foul tip.

Bart talked his way into finishing the inning, but Giants manager Gabe Kapler said a subsequent evaluation not only prompted him to be removed from the game, but also to be questionable moving forward.

“When he got to the dugout, he wasn’t feeling great, so we got him out of there,” Kapler said. “He told the doc after the game that he had pressure (in his head). We’ll evaluate him (Tuesday) morning, and we’ll see what his availability is.”