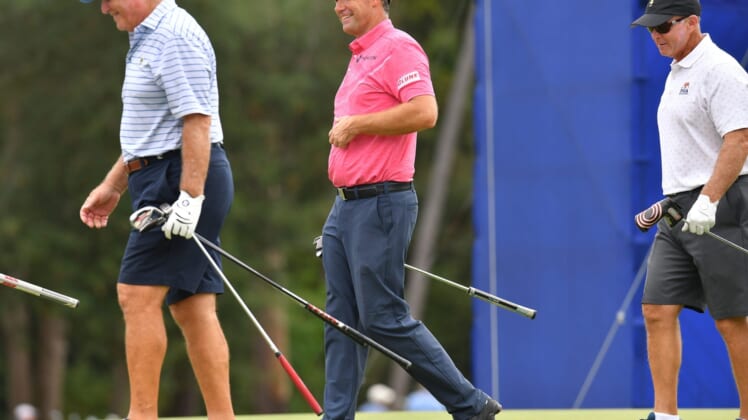 Three-time major winner Padraig Harrington, playing just his fourth PGA Tour Champions event, is tied for the lead after the first round of the Rapiscan Systems Classic.

The 50-year-old Irishman is level with Tim Herron after they each shot 5-under-par 67 on Friday at Grand Bear Golf Club in Biloxi, Miss.

Harrington, who has never finished better than a tie for 18th on the over-50 circuit, is playing the Mississippi event as a warmup for his appearance in the Masters next week. He won the Open Championship in 2007 and 2008 and the PGA Championship in 2008.

“I like the golf course, this course suits me,” he said. “Some of the (Champions) golf courses certainly I’ve gone and said, well, kind of tough for me, but this one I’ve come out and said this really does (work for me). … I’ve got quite an advantage off the tee in places, so I was confident going out there.”

Harrington recorded an eagle on the par-5 second hole, and he finished with four birdies and one bogey.

“I think there’s better in me, maybe not scoring-wise, but I think I can play a little better,” he said. “But even then I’m not going to put myself under too much pressure, too much stress for that. I’ll just keep doing what I’m doing.”

Herron, 52, also is chasing his first Champions victory, with his best result a tie for second at the Boeing Classic last year. He produced five birdies in Friday’s bogey-free round.

Canada’s Stephen Ames and Australia’s David McKenzie are tied for third at 68.