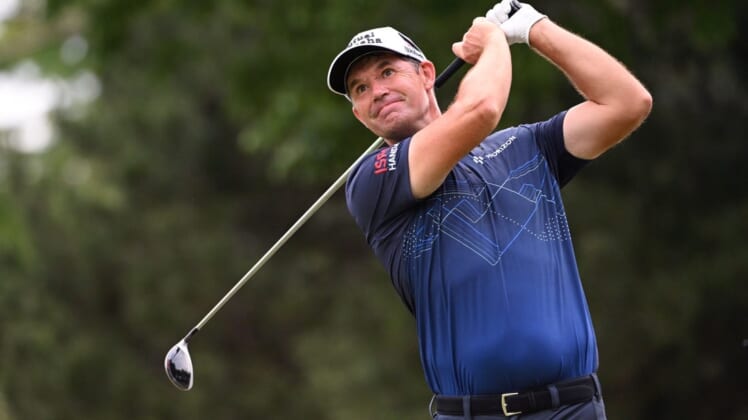 Padraig Harrington of Ireland fired a 5-under-par 66 on Saturday to expand his lead to a whopping five strokes at the U.S. Senior Open in Bethlehem, Pa.

Harrington sits at 11 under, five strokes ahead of Gene Sauers (68) and Rob Labritz (69). Harrington owned a one-shot lead after 36 holes.

Harrington’s 66 tied for the low round of the day at Saucon Valley Country Club.

Harrington posted his lowest 54-hole score (202) on the Champions Tour in pursuit of his first victory on the circuit.

The 50-year-old came back to the field with two bogeys in his last four holes, including No. 18. Those were the only stains on a round that included five birdies and an eagle.

“I’m not really sure what to think,” Harrington said. “I know I missed some chances out there to be lower, and I know I got a few breaks here and there and did some good stuff.

“I know, when it comes to this course with a five-shot lead, I’ve given myself plenty of options to win this tournament. That’s the important thing. When you’ve got a lead like this, in not even a perfect world, but in dreamland, you think you’re going to go out there and play well and run away with it, which is a possibility,” he added.

Sauers knows he’s going to need some breaks to have a chance at the title Sunday.

“Like I say, in a major championship, hit fairways and give yourself opportunities. Hit the greens and hoping that — I don’t want to say anything bad, but hopefully they kind of mess up a little bit,” Sauers said. “Somewhere along this line I’m going to need to have a two-shot swing from somewhere in the middle of the round somewhere just to keep me going.”

Jim Furyk posted the day’s other 66, vaulting 39 spots up the leaderboard into a tie for 15th at even par.