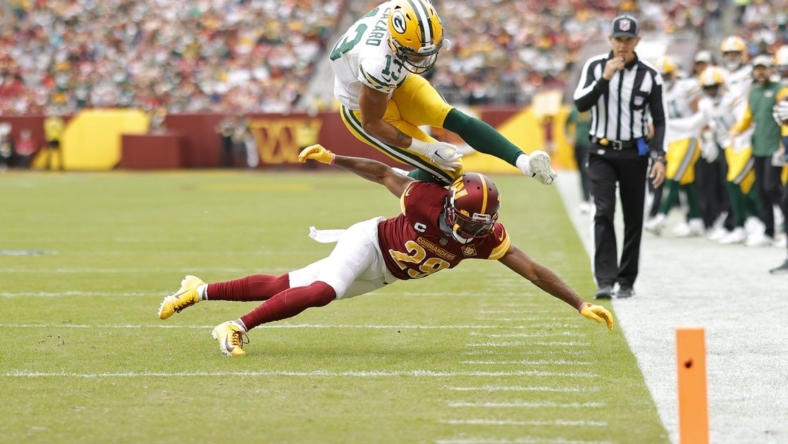 Lazard added he’s not concerned long term about the shoulder but responded “probably not” when asked about playing Sunday.

Lazard said he was injured on the final play of the third quarter in last week’s loss to the Washington Commanders, describing how it felt.

Lazard, 26, has 26 catches for 340 yards and four touchdowns in six starts this season. He missed Week 1 with an ankle injury after getting stepped on in practice.

Packers quarterback Aaron Rodgers (throwing thumb) was back Thursday as a limited participant after sitting out Wednesday’s practice. He might not recognize his receivers on the practice field.

In addition to Lazard’s absence, Randall Cobb is on injured reserve, and wide receivers Sammy Watkins and Romeo Doubs were limited for the second consecutive day with hamstring injuries. The top wide receiver in terms of receptions in 2022 available to practice Thursday was rookie Christian Watson, who has seven receptions for 52 yards. Watson was inactive the past two games.

Left tackle David Bakhtiari did not participate Thursday after being limited on Wednesday. Bakhtiari called his knee a “fluid situation” but didn’t elaborate. He missed last week’s game.

“That situation’s going to be fluid the rest of the year,” Packers coach Matt LaFleur said Thursday.

Linebacker Rashan Gary (concussion) was a limited participant Thursday after missing Wednesday. Cornerback Shemar Jean-Charles (ankle) did not participate. Guard Elgton Jenkins (knee) was limited after a DNP on Wednesday.