Packers tight end Robert Tonyan to have MRI on knee

The Green Bay Packers‘ 24-21 defeat of the Arizona Cardinals on Thursday night may have come at a severe cost.

Packers tight end Robert Tonyan appears to have suffered a significant knee injury, according to multiple reports. NFL Network said he is scheduled for an MRI on Friday.

Tonyan, 27, was injured at the end of a 33-yard reception in the fourth quarter. He appeared to be in pain while clutching the knee immediately after going to the ground.

After the game, Packers coach Matt LaFleur didn’t provide specifics on the severity of the injury. 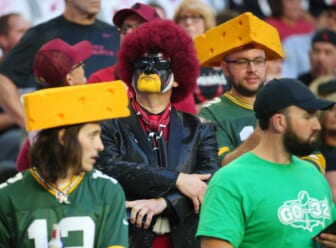 “You know, as far as whether that’s long-term, I don’t know, but I am sick for him, I’m sick for us and just my heart goes out to him,” LaFleur said.

Tonyan, who caught three passes for 49 yards against the Cardinals, has 18 receptions for 204 yards and two touchdowns this season.

In his fourth year out of Indiana State, he has totaled 84 catches for 967 yards and 15 touchdowns for the Packers, 11 of which came last season. He first signed with Green Bay’s practice squad in December 2017.

The Packers were already thin in the receiving corps prior to Tonyan’s injury. Receivers Davante Adams and Allen Lazard (COVID-19) and Marquez Valdes-Scantling (hamstring) all missed Thursday night’s game.

Meanwhile, rookie running back and kick returner Kylin Hill is done for the season, according to NFL Network.

The seventh-round pick suffered a knee injury while returning a kickoff during the second half Thursday night. He injured his right leg in a brutal collision with Cardinals running back Jonathan Ward, who suffered a concussion on the play. Hill was carted off the field.