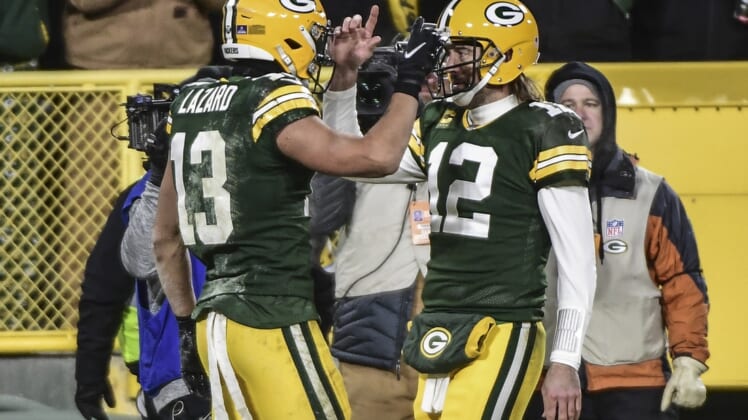 Green Bay has taken over as the new Super Bowl favorite after the Packers clinched the top seed in the NFC with a week remaining in the regular season.

The Packers (13-3) are now the +400 favorites to win Super Bowl LVI by both BetMGM and DraftKings. That is ahead of Kansas City (+500) at both sportsbooks after the Chiefs lost to the Cincinnati Bengals in Week 17.

Green Bay has even shorter odds at +380 by FanDuel.

The Chiefs’ loss opened the door for Tennessee to claim the No. 1 seed in the AFC with a win over the 4-12 Houston Texans this weekend. The Titans and Chiefs are both 11-5, but Tennessee owns the tiebreaker even if Kansas City beats the Denver Broncos on Saturday.

The Packers opened the season at +900 at BetMGM but their odds have steadily shortened as they have gone 9-2 in the conference. The Chiefs opened at +600, while the Tampa Bay Buccaneers have moved from +1200 to +700 at the sportsbook while clinching the NFC South at 12-4 despite injuries to several key playmakers.

Tampa Bay has been backed by the highest ticket percentage at BetMGM at 10.2 percent along with the most money bet on an individual team at 12.5 percent. The Bucs are +900 at DraftKings, behind the Packers, Chiefs, Buffalo Bills (+750) and Los Angeles Rams (+850).

The Bills are +800 at BetMGM while the Rams are +900. The Arizona Cardinals (11-5) are the sportsbook’s biggest liability (+1800) in the Super Bowl market according to data released Tuesday, followed by the Bucs and Packers.

The New England Patriots, whose odds shortened to +700 in mid-December, have slipped to +1800. They enter the final week of the regular season tied atop the AFC East at 10-6, but the Bills own the tiebreaker with a 4-1 record within the division.

Meanwhile, Tennessee’s odds have shortened from +2000 in mid-December to +1200. An even bigger move has been made during that stretch by the Cincinnati Bengals, who have gone from +5000 longshots to +2000 while wrapping up the AFC North.