The Green Bay Packers front office apparently hashed out enough differences with quarterback Aaron Rodgers to get him to play for the team this season.

Much to the delight of Cheesehead fans, the reigning NFL MVP showed up for Packers camp on Tuesday, and the team’s official Twitter feed got a great action shot of Rodgers strolling in to Lambeau Field:

Rocking some flip-flops, some pulled back hair, shades set to stun and an iconic T-shirt from The Office, Rodgers looked relaxed, at ease and ready to ball out in 2021.

It’s clear that Rodgers is showing up for his teammates and the fan base, because the bridges were burned so badly that Green Bay’s leadership basically had to beg Rodgers to play for the Packers this coming year. He made a list of demands that had to be met, which included a voided 2023 contract year, and the power to dictate where he’d play in 2022. 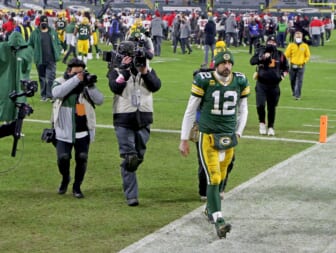 That’s right. Rodgers essentially gets to choose where he’s traded to after this season.

The drama surrounding Rodgers and the Packers has been well-documented throughout the offseason. This is about the best outcome GM Brian Gutekunst and CEO Mark Murphy could’ve hoped for. They finally listened to Rodgers, but it’s too little, too late as far as him finishing his career in Green Bay.

Losing Rodgers in 2022 means No. 1 wide receiver Davante Adams will be gone in all likelihood as well. Packers fans need to soak it all in this year, because Rodgers has one foot out the door. While he’ll give all he has for 2021, losing him and Adams, and ushering in the Jordan Love era, won’t come without some serious growing pains.