Packers aim to end slide, so do downtrodden Lions 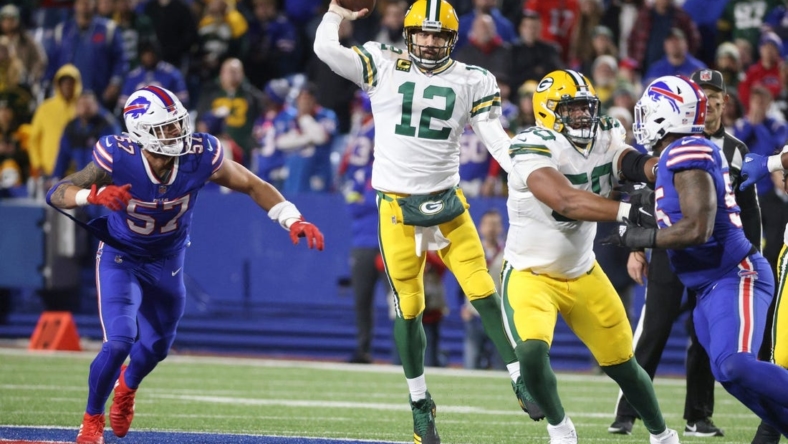 The Green Bay Packers are trying to prevent their season from sliding into the abyss. The Detroit Lions seem to already be raising the white flag.

The good news for one of these teams — barring an unlikely tie — is that a losing streak will be broken when they face each other in Detroit on Sunday.

Green Bay (3-5), which is completing a three-game road swing, has dropped four straight. Detroit (1-6) occupies its usual spot at the bottom of the NFC North after losing five straight.

Trailing first-place Minnesota by 3 1/2 games, the Packers may have already dug themselves too deep of a hole to win the division. A wild-card spot is still very much within reach, but they can’t afford many more slip-ups.

“We’ve displayed, at times, some good level of football but it’s just been too inconsistent,” Green Bay coach Matt LaFleur said. “I don’t think it’s been complementary football all the time. We realize it’s an imperfect game but when one side of the ball isn’t producing as you would like, the other side’s got to pick it up.”

Injuries on the defensive side have been challenging but the Packers haven’t allowed more than 27 points in any game, including their 27-17 loss to Buffalo and its high-octane attack on Sunday night.

Offensively, Aaron Rodgers still hasn’t found a reliable No. 1 receiving threat. Allen Lazard, who leads the team with a modest 340 receiving yards, missed the Bills game due to a shoulder injury but practiced on a limited basis Wednesday. Rodgers is averaging a meager, by his standards, 225 passing yards per game.

The running back duo of Aaron Jones and AJ Dillon has only reached the end zone twice on the ground.

“We’ve struggled at Ford Field many times,” LaFleur said. “This is a really good offense and they play extremely hard in all three phases.”

Detroit no longer has a dynamic receiving threat at tight end. The front office dealt away T.J. Hockenson to the Vikings at the trade deadline for draft pick compensation.

“It’s the regular season right now, so players being acquired, that’s exciting,” Holmes said. “Draft picks, that’s not exciting right now. It’s not draft season. I don’t think anyone gives a damn about draft picks that we get. I understand that.”

Hockenson had a 58-yard reception against Miami during a wild first half on Sunday when the teams scored a combined 44 points. The Lions were shut out in the second half as the Dolphins rallied for a 31-27 victory.

“What I have to judge is where does his production go now?” he said. “I have to feel OK with that production going to (Aman-Ra) St. Brown, Kalif (Raymond), (Josh) Reynolds, (D’Andre) Swift, another carry for Jamaal (Williams) and the other tight ends.”

The Lions also have to tighten up a defense that allowed 382 passing yards to Tua Tagovailoa last week.

“We know the damage that can be done with (Rodgers),” Campbell said. “Certainly, trying to close the pocket in on him will go a long way (toward slowing him) and we’ve got to challenge their receivers.”

Swift (ankle, shoulder) and tight end Brock Wright (concussion) were among the Lions who didn’t practice on Wednesday.

Linebacker De’Vondre Campbell (knee) and receiver Christian Watson (concussion) are among the Packers who didn’t practice.