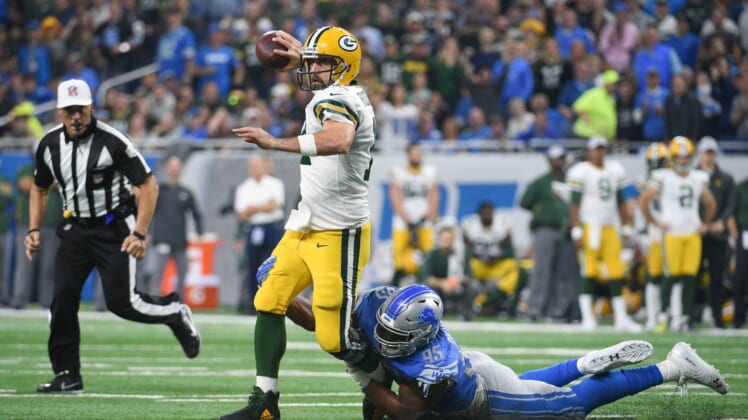 Green Bay Packers quarterback Aaron Rodgers has been playing through a strained MCL ligament and a bone bruise in his left knee. He suffered the injury in Green Bay’s season opener and has not missed a game.

As Rodgers had previously noted, the condition itself might worsen as the season progresses. Unfortunately, that appears to have already happened heading into Week 6’s game against the lowly San Francisco 49ers.

“Yeah, kind of a setback last week, the beginning of the week. Got to be in the rehab group again today, got a lot of good work in with (assistant trainer) Nate (Weir) and just hoping I get back out there tomorrow and have a feel-good Friday and a practice (Sunday) and be good to go — hopefully back to where I was in Detroit,” Rodgers told ESPN’s Rob Demovsky on Thursday.

Rodgers seemed to have aggravated the injury early in last week’s loss to the Detroit Lions. He’ll now likely be forced to go with a bulky knee brace for the foreseeable future.

Having missed the majority of Green Bay’s practices since suffering the injury, Rodgers is hoping rest and midweek rehab will help his knee improve. Unfortunately, it seems that he’s now more at risk of further injury as the season progresses.

At 2-2-1 on the year, Green Bay can’t afford to be without Rodgers for any substantial time. Backup quarterback DeShone Kizer was horrendous in his stead during the season opener and isn’t ready to make an impact under center.