The Green Bay Packers have stretched Aaron Rodgers‘ patience to the breaking point, and it feels like they have to win the Super Bowl if they want their MVP quarterback to stick around beyond 2021.

Well, Rodgers is fully aware how much of a watershed moment this season represents for his own career and the Packers as a whole. He spoke to the media recently about the ramifications of what lies ahead, per Yahoo Sports’ Jay Busbee:

“I think we all know what’s at stake… [My] perspective is to focus on this season and enjoy the most out of this season, because there are a lot of unknowns. […] [The Packers] jumped through some hoops to get under the cap this year. Obviously, the cap is expected to go back up next year, but you never know. So we’re just going to enjoy this season. It’s Title Town. It’s championship or disappointment.”

This doesn’t feel like lip service. Rodgers has reiterated multiple times publicly how much work he did on himself during the offseason, and he even was 50-50 on retiring. However, to paraphrase the man himself, he found wisdom in his silence while the drama in Green Bay swirled prior to his reporting to training camp.

With the space and time to evaluate his future, Rodgers appears to be returning to the gridiron with a renewed sense of clarity, mindfulness and candor.

Based on how well he performed in 2020, there’s nothing to indicate that Rodgers won’t continue on his current trajectory of greatness as long as he remains healthy. He made the Packers’ decision to trade up in the first round and draft Jordan Love last year look downright foolish.

It would’ve been fascinating to see Rodgers go to a different team where he truly is on the same page with the organization’s leadership, but that will likely come in due time. Rodgers recognizes that if he puts together another spectacular season, everything will work itself out.

Love is waiting in the wings as the QB of the future, and for better or worse, it’s in the Packers’ best interest to play him as soon as possible from a financial standpoint, since he’s on that cheap rookie contract. 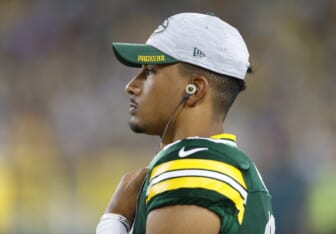 All the pressure is on Green Bay to not only get a haul in return for Rodgers, but to execute the unlikely scenario of an ultimate QB trifecta, wherein the Cheeseheads enjoy continued decades of long-term success at the most important position in sports.

Expectations and the standard of play before him couldn’t be higher for Love, as he’ll be the eventual encore act for Brett Favre and Rodgers. No pressure!

If the Packers fail Rodgers again this year, and manage only one Super Bowl during his lengthy tenure, it’ll be viewed as complete long-term incompetence by the organization. That only adds to the stakes. Oh, and wherever Rodgers goes, his No. 1 wide receiver, Davante Adams, may very well follow after breaking off contract negotiations this summer.

Losing Rodgers would be bad enough. Letting Adams loose would be catastrophic for Green Bay, and likely doom Love’s hopes of thriving in 2022.

Championship or disappointment, indeed — but maybe not so much for Rodgers as the entire Packers franchise.