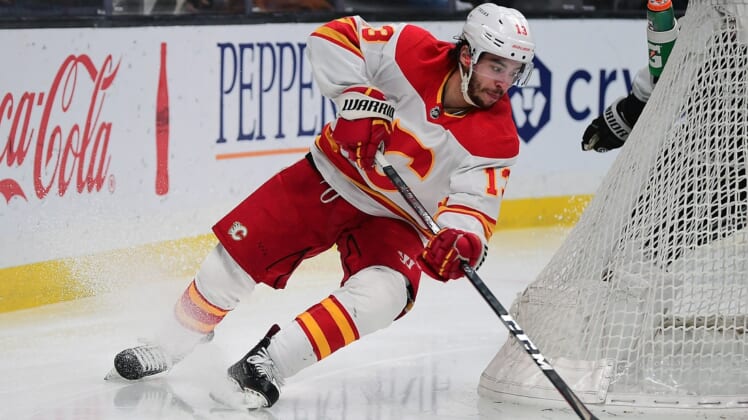 The first quest for the Calgary Flames was to snap their losing skid. That mission was accomplished with Monday’s 3-2 win over the surprising Los Angeles Kings.

Next up for the Pacific Division-leading Flames (41-19-9, 91 points) is to take advantage of a favorable schedule, with their four-game trip heading down the road to face the struggling Anaheim Ducks (28-31-8, 68 points) on Wednesday.

The trip, which includes stops against the San Jose Sharks and expansion Seattle Kraken — the two clubs below the Ducks — is an opportunity for the Flames to strengthen their hold on the division lead. Both the Kings and Edmonton Oilers are hot on their heels.

“We have a big road trip here and didn’t play too, too well toward the end of our home stand,” said forward Johnny Gaudreau, who scored twice in the Los Angeles victory. “To get on the road here — it feels like it’s been a while since we’ve been on a road trip — it’s kind of nice. You get to have … a road-trip mentality. We started off with a big win and have another big one coming up against Anaheim.”

Gaudreau’s 13th three-point game of the season has him at 95 and looking to reach the 100-point mark for the first time in his career.

His offensive flair couldn’t be missed against the Kings, but the Flames took great pride in how they shut the door, notably by killing three Los Angles power plays in the third period.

“We did a lot better job,” defenseman Erik Gudbranson said of their penalty kills. “We need to get those done. At the end of the day, that’s what it came down to and everyone stepped up to do it.”

The rebuilding Ducks, who are coming off a 6-1 loss to the Oilers on Sunday, have been in a free fall with just one victory in their last 13 games (1-9-3).

Barring a miracle finish the Ducks are destined to miss the playoffs, but those thoughts were pushed to the background with Tuesday’s news that long-time captain Ryan Getzlaf, the last player remaining from Anaheim’s 2007 Stanley Cup-winning squad, would retire at the end of the season.

“I’ve kind of always said that I was going to let my body and mind kind of dictate when I was going to retire,” Getzlaf said. “I remember talking to buddies when I first came into the league, I thought that was going to be at about 26, so I definitely over-lasted what I thought I would.”

Getzlaf, who has collected 31 points in 49 games this season, is a two-time Olympic gold medalist and was part of the championship team at the 2016 World Cup of Hockey. Coincidentally, he played junior hockey for the Calgary Hitmen, the Western Hockey League club owned by the Flames.

The Ducks may also receive a boost for the game, with leading scorer Troy Terry likely to return after suffering face and eye injuries during an altercation Friday against the Arizona Coyotes. Terry, who has collected 31 goals and 57 points, practiced on Tuesday.