Pacers rally, pull away from Raptors in 14-point win 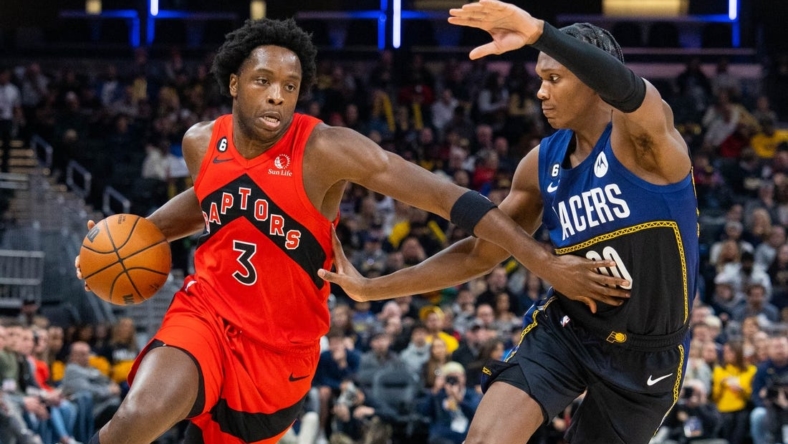 The Pacers fell behind 67-52 early into the third quarter before going on a 20-6 run. Despite Toronto briefly pushing its lead back to 10 points, Indiana remained within striking distance long enough into the fourth quarter to ultimately take control.

Indiana dominated the final period, 36-14, punctuated with a decisive 23-5 run to close the game.

Tyrese Haliburton’s deep 3-pointer with 3:20 remaining doubled the Pacers’ lead and ignited a 10-2 stretch over the game-breaking final run that squashed any chance of a Raptors rally.

Hield scored eight consecutive points — all but one of Indiana’s final nine — down the stretch. He knocked down the last two of his game-high five made 3-pointers in the closing burst.

Hield’s 5-of-11 shooting from beyond the arc bolstered the Pacers to a 19-of-43 performance from deep. Bennedict Mathurin maintained his hot hand, one game after scoring an Indiana franchise record for a rookie in a single period, connecting on 3-of-4 attempts from outside on Saturday.

Mathurin finished with 15 points off the bench. He was one of six Pacers to score in double-figures, joining Hield. Myles Turner recorded 19 points and 10 rebounds, Jalen Smith made three 3-pointers en route to 16 points, and Aaron Nesmith and Isaiah Jackson both chipped in 10 points off the bench.

Indiana also got eight points each from Oshae Brissett, Andrew Nembhard and Haliburton. Haliburton dished out 15 assists, leading the way as the Pacers scored 33 of their 41 field goals off of assists.

O.G. Anunoby led all scorers with 26 points, but his 2-of-7 shooting from 3-point range reflected an overall issue for Toronto in the loss. The Raptors shot just 7-of-35 from long range and finished worse than 40 percent from the floor overall (37-for-94).