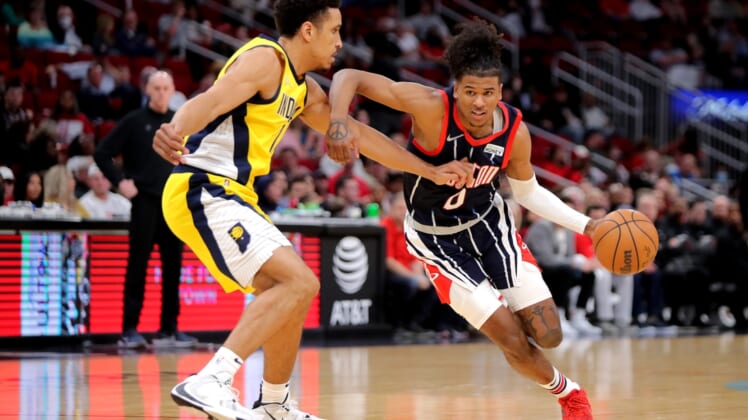 Malcolm Brogdon scored 25 points while Goga Bitadze added 23 on perfect shooting as the visiting Indiana Pacers rallied for a 121-118 victory over the Houston Rockets on Friday.

The Rockets seized a 106-97 lead on a Jalen Green alley-oop dunk with 5:56 to play. Brogdon subsequently drilled a 3-pointer that keyed the comeback.

Buddy Hield added another trey, and when Bitadze scored through a foul at the 1:06 mark, the Pacers pulled even at 115-115. Bitadze gave Indiana the lead for good with 19.2 seconds left when he converted an offensive rebound. He finished 9 for 9 from the floor and grabbed nine rebounds.

Wood and Brogdon engaged in a riveting back-and-forth in the third quarter, with Wood keying a 16-2 run that opened the frame. Wood scored eight points during that blitz, including a pair of 3-pointers, the final one pushing Houston to a 72-63 lead. But Brogdon repeatedly returned serve to keep Indiana close, tallying 12 points on 5-of-8 shooting in the period.

Wood paired 20 points with six rebounds in the frame and lifted Houston to a 95-83 lead entering the fourth. Down the stretch, Brogdon and Bitadze proved too much for the Rockets.

Bitadze and Jalen Smith combined to set a bruising tone for the Pacers in the first half, totaling 29 points on 13-of-14 shooting plus 12 rebounds. Yet despite their dominance, the Rockets faced just a five-point deficit at the intermission.

Indiana lost Smith with 3:58 remaining in the third quarter when he took a blow to the face on a Wood crosscourt pass. Smith remained on the floor for several minutes before trudging back to the locker room with Indiana trailing 85-80. Smith finished with 17 points and 10 rebounds in only 13 minutes off the bench.