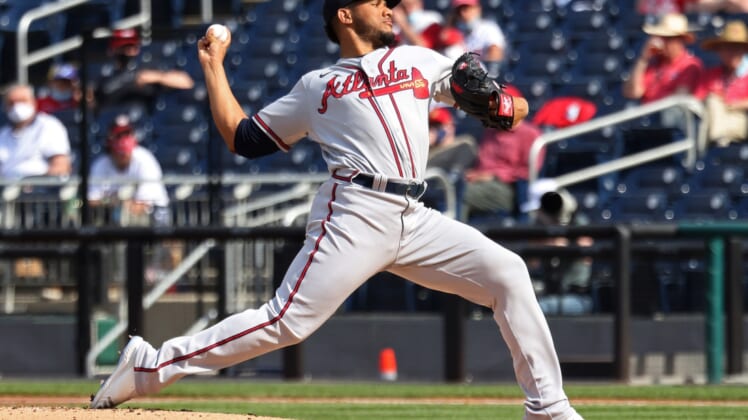 Pablo Sandoval hit a two-run pinch-hit homer in the top of the seventh inning and the visiting Atlanta Braves defeated the Washington Nationals 2-0 to sweep a doubleheader on Wednesday.

Sandoval hit a 3-2 fastball from Tanner Rainey (0-1) to center for his second homer of the season after Dansby Swanson had singled with two outs.

Ronald Acuna Jr. had three hits and scored twice to lead the Braves to a 7-6 win in the first game.

Luke Jackson (1-0) pitched a scoreless sixth inning, and Sean Newcomb struck out the side in the seventh for his first save as Atlanta won the final two games of the three-game series.

Washington’s Stephen Strasburg pitched six shutout innings in his 2021 debut. The right-hander allowed one hit, while striking out eight and walking two on 85 pitches. He retired the last 10 batters he faced.

In 2020, Strasburg pitched just five innings before his season ended and he ultimately underwent surgery for carpal tunnel syndrome.

Victor Robles led off the Washington sixth with a walk, stole second, and went to third on a fly out. Juan Soto was walked intentionally, but Starlin Castro grounded out.

In the opener, Travis d’Arnaud added a two-run double for Atlanta, which rallied from a 4-1 deficit.

Trea Turner hit his second home run of the season for Washington, and Castro had three hits and drove in three runs.