Pablo Lopez guides Marlins to another win over A’s 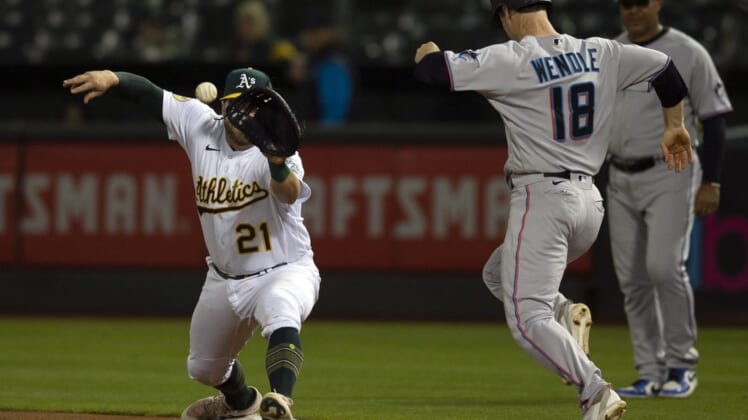 Brian Anderson homered and Jesus Aguilar and Jacob Stallings chipped in with RBI singles for the Marlins, who won the series opener 3-0 on Monday night behind Edward Cabrera’s eight-inning gem.

One day later, Lopez (8-8) went six equally effective innings, limiting the A’s to a double and three singles. He walked two and struck out five.

The impressive effort came on the heels of a four-game winless streak in which he was tagged for 18 runs in 18 innings.

Anderson’s homer, his fifth of the season, led off the fourth inning and gave the Marlins the lead for good. It came off A’s starter Zach Logue (3-8), who was charged with just two runs on three hits in 5 1/3 innings. He struck out seven without issuing a walk.

Logue was pulled from a 1-0 game with one on and one out in the sixth, then watched the Marlins tee off on A’s reliever Domingo Acevedo for four runs. Aguilar’s single made it 2-0, and after Acevedo got a second out, Encarnacion came through with his big hit to left field, doubling the advantage.

Stallings’ single followed and made it 5-0.

Lopez stranded the bases loaded in the bottom of the inning, then handed the ball off to Tommy Nance, who pitched a pair of hitless innings.

The A’s avoided a shutout and made things interesting against Cole Sulser in the ninth, getting a one-out RBI single from Stephen Vogt that prompted the Marlins to summon closer Tanner Scott from the bullpen.

Shea Langeliers greeted Scott with a run-scoring double. Scott got Jonah Bride for the second out on a sacrifice fly, allowing the A’s to pull within 5-3. However, Sheldon Neuse grounded out while representing the potential tying run, allowing Scott to notch his 19th save.

Encarnacion and Stallings had two hits apiece while Anderson scored twice for the Marlins, who won a second straight game for just the second time since July 13-14.

Sean Murphy had two doubles and Vogt added two singles for the A’s, who have lost 13 of their past 17 games.