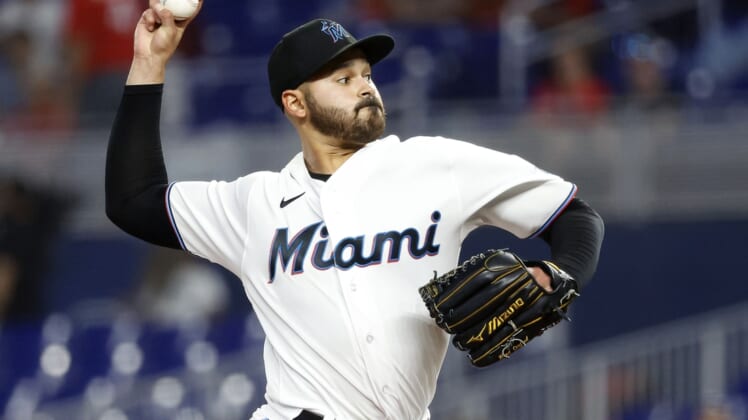 Pablo Lopez, who got married on Monday, celebrated by striking out nine batters in seven scoreless innings as the host Miami Marlins defeated the St. Louis Cardinals 5-0 on Thursday night.

Miami snapped its eight-game losing streak against the Cardinals, a skid that started last year. The Marlins had scored just seven runs in those eight defeats.

Jesus Sanchez and Jazz Chisholm Jr. slugged homers for Miami, which snapped a two-game losing streak overall and ended its homestand with a 4-3 record.

The Cardinals had won the first two games of the three-game series and four of their previous five overall.

Lopez (2-0) lowered his ERA to 0.52 through three starts this season. He threw 100 pitches, walked none and allowed three hits — all singles.

Sanchez went 2-for-3 with a walk and three runs.

Chisholm slugged a two-run shot on a 0-2 hanging slider from Aaron Brooks in the seventh inning. Chisholm beefed with umpire Phil Cuzzi on both strike calls before going deep.

Miami got to Hicks in the second. Sanchez drew a leadoff walk, advanced to second on Jesus Aguilera’s hit and to third on Joey Wendle’s one-out infield single. Sanchez then scored on Brian Anderson’s fielder’s-choice grounder.

The Marlins extended their lead to 2-0 in the fourth.

Sanchez started the rally again, this time with a leadoff single. He advanced to second on Aguilar’s single, reached third on Avisail Garcia’s fly out to center and scored when reliever Drew VerHagen’s pitch sailed off of Yadier Molina’s glove. Molina was charged with a passed ball.

In the sixth, Marlins shortstop Wendle made a fielding gem, diving to his left to stop a smash by Dylan Carlson and then throwing him out at first.

After flashing the leather, Miami flexed its muscles. Sanchez’s homer in the bottom of the sixth traveled 428 feet to right. Chisholm made it 5-0 with his 378-foot dinger, also to right.

Just before Chisholm’s homer, Cuzzi emphatically waved for him to get back in the batter’s box. Molina tried to get Brooks to pitch quickly in order to take advantage of Chisholm not being ready to hit.

However, Brooks wasn’t ready, either, and when he was, it was Chisholm who took advantage.