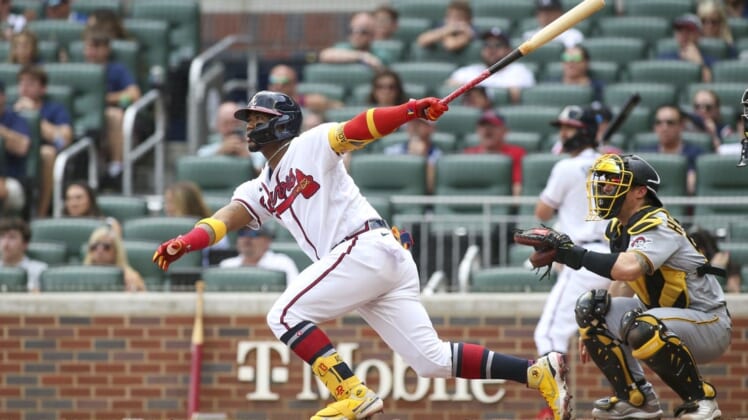 Ozzie Albies’ grand slam capped an eight-run outburst and sparked the Atlanta Braves to a 10-4 win over the visiting Pittsburgh Pirates on Saturday and extend their winning streak to 10 games.

The Braves were trailing 4-2 entering the bottom of the seventh when the comeback began. Michael Harris II singled home the first run and Dansby Swanson’s three-RBI bloop single to right put Atlanta ahead for the first time.

Atlanta loaded the bases and Albies hit his eighth homer into the right-field stands. It was the fifth grand slam of his career.

The winning pitcher was Jesse Chavez (1-1), who pitched two scoreless innings, allowed one hit and struck out three.

The losing pitcher was Duane Underwood Jr. (0-2), who pitched 1 1/3 innings and allowed three runs on two hits, one walk and two strikeouts. Chris Stratton followed and gave up five runs on three hits — including Albies’ slam — and one walk without retiring a batter.

The Pirates scored twice in the first inning on solo home runs from Bryan Reynolds, his ninth, and Daniel Vogelbach, his seventh. It was Vogelbach’s first homer since May 14 against Cincinnati.

The Braves tied the game in the bottom of the first with two solo shots, a leadoff 434-foot homer from Ronald Acuna Jr., his sixth, and another from Austin Riley, his 16th6. It was Acuna’s 25th career leadoff homer.

Pittsburgh took a 4-2 lead in the fifth inning. Reynolds doubled in the first run and scored on a double by Ke’Bryan Hayes. Reynolds went 3-for-4 and is 8-for-12 in the first three games of the series.