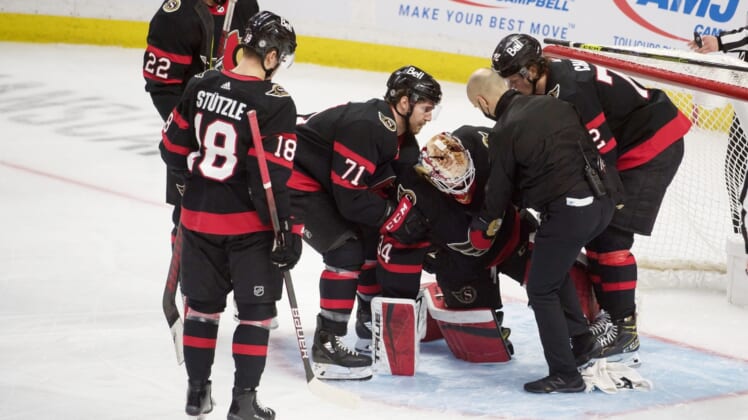 Mar 17, 2021; Ottawa, Ontario, CAN; Ottawa Senators goalie Joey Daccord (34) is helped off the ice after getting injured in the third period against the Vancouver Canucks at the Canadian Tire Centre. Mandatory Credit: Marc DesRosiers-USA TODAY Sports

Daccord isn’t the Senators’ only netminder nursing an injury, as Dorion labeled Matt Murray week-to-week with an upper-body ailment. Fellow goaltender Marcus Hogberg is dealing with a lower-body injury, however Dorion noted that he could be in Belleville of the American Hockey League by the end of March for a conditioning stint.

Daccord, 24, was injured in the third period of Wednesday’s 3-2 shootout loss to the Vancouver Canucks.

He recorded his first NHL victory just three days earlier. He entered the game in relief of an injured Murray to lift Ottawa to a 4-3 win Sunday over the Toronto Maple Leafs.

“I’m going to get emotional. Definitely not the way I drew it up in my head, but against the Leafs, at home, obviously a crazy situation and that’s why you’ve got to always be ready,” Daccord said in the postgame interview. “What an effort out of our group. I don’t even have words right now, I just want to thank my family for everything they’ve done for me. It’s pretty special.”

Daccord owns a 1-4-1 record with a 3.50 goals-against average and .894 save percentage in nine career appearances (seven starts) with the Senators.