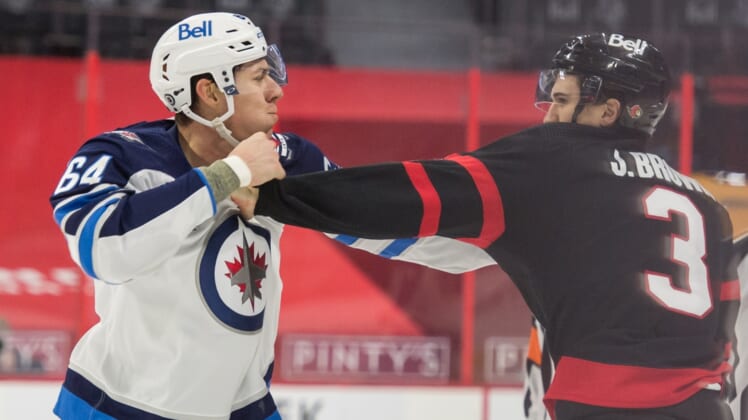 Connor Brown ran his goal-scoring streak to eight games, Brady Tkachuk scored twice and Evgenii Dadonov’s third-period tally completed the comeback as the host Ottawa Senators snapped a four-game losing skid with a 4-2 win over the Winnipeg Jets on Monday.

Goaltender Anton Forsberg made 24 saves for the Senators. Josh Norris and Thomas Chabot both collected a pair of assists.

Kyle Connor and Nikolaj Ehlers replied for the Jets, who had their three-game winning streak snapped. Connor Hellebuyck stopped 20 shots, but his glaring miscue led to the game winner.

With the score tied just past the midway point of the final frame, Hellebuyck mishandled Chabot’s long, bounding dump-in right to him and Dadonov chipped the loose puck into the net for his 12th goal of the season.

Tkachuk’s second of the game, and 14th of the year, while on a breakaway provided the Senators much-needed insurance with 3:48 left.

Despite trailing 2-0 halfway through the first period, the last-place Senators fought back for an impressive win. Tkachuk netted a power-play goal of his own when he redirected a Norris point shot at the 11:03 mark of the opening period.

Then, Brown’s goal that extended his franchise record to eight straight games tied the contest with 82 seconds left in the first period. Chris Tierney stopped a Winnipeg breakout, fed a pass to Brown and he whipped a long shot to become the first NHLer to score in eight consecutive games since Mike Green of the Washington Capitals in 2008-09.

The Jets, who are in a battle for second in the North Division and still hold a chance to earn top spot, appeared on their way to victory when they staked themselves to a two-goal edge.

Connor opened the scoring at exactly the five-minute mark with a power-play tally that gives him 19 goals on the season. Connor set up shop at the right faceoff dot and blasted a one-timer that found the mark. The goal gave Connor 15 points (6-9-15) in 12 career games against the Senators.

Ehlers doubled the Winnipeg lead when he gained the puck near his own blue line, worked his way to the high slot and fired a wrist shot that lit the lamp at 8:25 and extended his goal-scoring streak to three games.