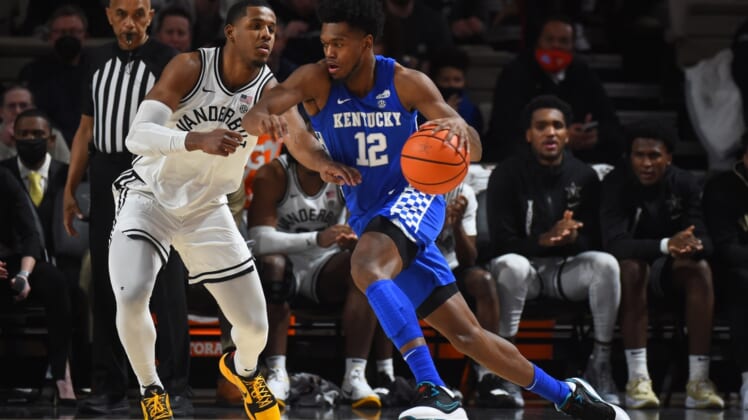 Tshiebwe’s previous career high was 29, set Saturday night in a 92-77 win over Georgia. The West Virginia transfer shot 11 of 16 from the field and 8 of 10 at the foul line in his 12th double-double of the season.

TyTy Washington Jr. added 15 points and four assists for the Wildcats (13-3, 3-1 Southeastern Conference). They connected on 52.5 percent of their field goal attempts and completely dominated the Commodores on the glass 42-26.

Scotty Pippen Jr. poured in a game-high 32 points and dished out four assists for Vanderbilt (9-6, 1-2), while Trey Thomas added 14 points. however, second-leading scorer Jordan Wright, who entered the game averaging 12.7 points, missed all four of his shots and failed to score.

Kentucky owned a 41-28 halftime lead and gradually put the Commodores away in the second half. Tshiebwe converted a pair of three-point plays to boost the advantage to 74-48 with 7:53 left, sealing the first 30-point, 10-rebound game for a Kentucky player since Tayshaun Prince did it against North Carolina on Dec. 9, 2001.

The first half was played in three distinct segments. The Wildcats owned the first eight minutes, scoring the first seven points of the game and opening up a 22-11 cushion when Davion Mintz drilled a 3-pointer at the 12:02 mark.

Vanderbilt responded with 11 straight points, holding Kentucky scoreless for more than five minutes and forging a 22-22 tie when Thomas canned a pullup jumper with 7:08 remaining in the half.

But the Wildcats put their stamp on the half’s remainder, beginning with Kellan Grady’s 3-pointer with 6:45 left. That started a run of 14 unanswered points that put Kentucky in control for the rest of the night.

The margin reached as high as 28 points before the Commodores scored the final 16 points to make the margin respectable.