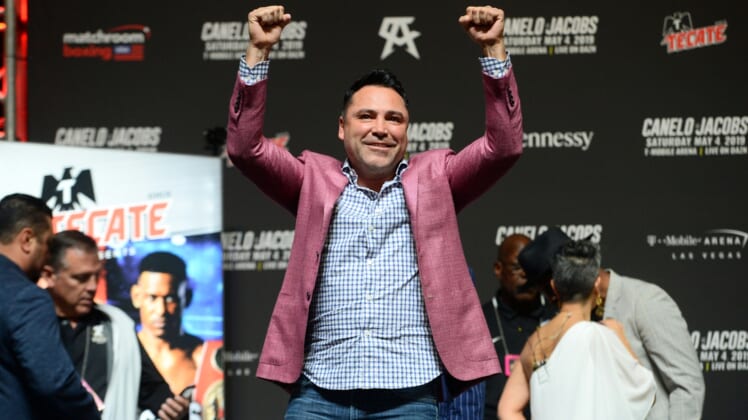 A very public feud may soon come to an end, as at least one of the principles involved is ready to bury the hatchet. This week, Oscar De La Hoya, expressed to TMZ that he would like to put an end to any and all public sparring with UFC president Dana White.

“I want to fix things up with Dana,” De La Hoya said.

That feud has been around a while, with both parties lobbing insults at one another since at least 2017. The feud may have gotten its start when De La Hoya criticized the concept of a UFC lightweight champion, Conor McGregor, making the move into boxing, which upset White.

Likewise, De La Hoya had a similarly adversarial relationship with fellow promoter Floyd Mayweather, with both promoters prodding one another publicly, and of which Mayweather said in 2017, “I just think that honestly, Oscar De La Hoya never liked me.”

This week, De La Hoya offered that he’d like to be on nicer terms with both White and Mayweather.

“I criticized the UFC a bit, and I was wrong for it,” he said. “I would love to patch things up with Dana and Mayweather. I have some big plans for Vegas.”

Prior to that, in 2018, White called De La Hoya a “cokehead” after the boxer included Chuck Liddell in a fight at an advanced age as one of De La Hoya’s first events as a promoter.

“I heard last week the cokehead, Oscar De La Weirdo, is talking s–, that I don’t have any place to tell guys when to retire,” White said. “It’s friendship, you f—- cokehead. I’ve been friends with Chuck Liddell for 20 years and the reality is Chuck Liddell retired when he should have retired eight or nine years ago.”