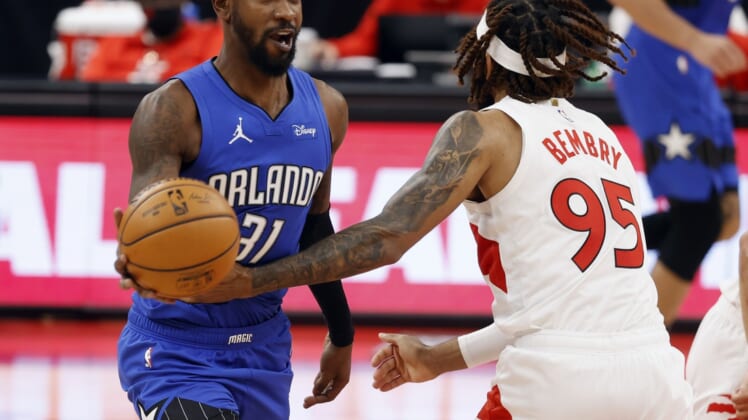 The Orlando Magic know they will need to get off to a better start Tuesday night if they are going to defeat the visiting Toronto Raptors.

The Magic trailed 27-15 after shooting 27.8 percent from the field in the first quarter on the way to a 115-102 loss to the Raptors Sunday night at Tampa.

“Getting off to a bad start made it more difficult,” Magic coach Steve Clifford said. “And the turnovers (four in the first quarter and 11 for the game) hurt us. They’re good at it. They take turnovers and they turn them into points.”

To make matters worse for the Magic, Aaron Gordon left the game in the third quarter with a left ankle injury. He was going to be evaluated to determine the severity of the injury. Gordon scored 14 points.

The Magic have lost three in a row and finished January with a 4-12 record. They are 2-11 since the Jan. 6 season-ending injury to Markelle Fultz (torn ACL, left knee).

Magic guard Evan Fournier, who scored 11 points Sunday, said that attitude has been a problem.

Cole Anthony led Orlando with 16 points against the Raptors.

“They’re a tough-minded defensive team,” Anthony said. “They help a lot. They’re all active. They’re constantly moving, so it’s definitely difficult to get into the paint and get to the spot we’re comfortable with, but it’s not impossible. I think we can still do a better job so we’ve just got to keep working.”

Unlike the Magic, the Raptors started fast and never looked back Sunday to end a three-game losing streak.

“We just came out ready to go,” Raptors coach Nick Nurse said. “You could see it right from the defensive stand at the start, really good execution offensively, and just kind of played pretty solidly throughout. There was really no dips in effort or energy or any of that kind of stuff, just a solid workmanlike performance.”

Siakam, after a slow start, is playing with enthusiasm.

“Over the past weeks, I haven’t been feeling well, little injuries here and there,” Siakam said. “For me, that’s the main thing. If I feel good, I have the ability to go out there and bring the energy and live with the results.”

Siakam shot 12-for-23 from the field Sunday, including only two 3-point attempts (both misses).

“I think (3-pointers) will probably work their way back in, but I think it’s a conscious effort on his part, our part, to get him going to the basket and get him a little bit more composed at the basket, too,” Nurse said.

The Raptors were without Norman Powell (right quadriceps contusion) and OG Anunoby (left calf strain) on Sunday. Powell could return Tuesday, but Anunoby could need another week.