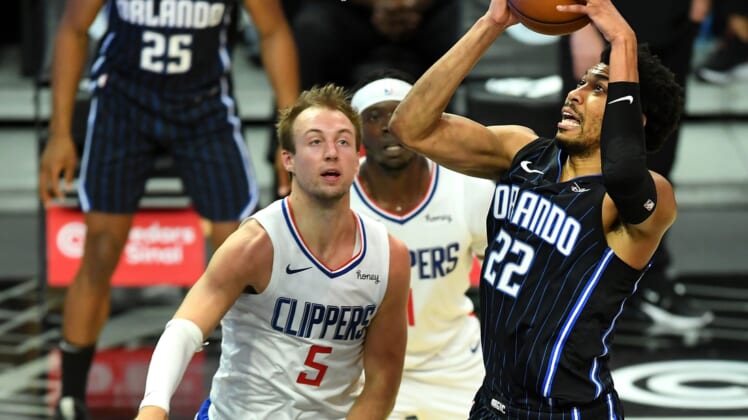 The Los Angeles Clippers let one slip away at home Tuesday against the Orlando Magic.

Orlando’s Terrence Ross tied the game at 93-all with 1:46 left on two made free throws. Ross played in his first game since March 14 after missing seven contests with right knee soreness. He finished with 15 points in 26 minutes.

After a Reggie Jackson miss for the Clippers, the Magic took their first lead of the game on the ensuing possession, a Wendell Carter Jr. tip-in.

Terence Mann hit a 3-pointer from the corner to pull the Clippers to within 97-96 with 25.5 seconds left. However, Orlando’s Michael Carter-Williams made two free throws to give his team a three-point lead.

The Clippers’ Jackson and Kawhi Leonard missed 3-point attempts to tie it, with both shots bouncing off the rim. Carter-Williams then corralled a loose ball that bounced off Leonard’s foot, ran down the floor and punctuated the victory with a rim-rattling dunk.

The Magic avoided losing their second consecutive game at Los Angeles after falling 96-93 to the Lakers on Sunday. Orlando had lost 13 of its past 15 games before Tuesday.

The Clippers had their six-game winning streak snapped. Los Angeles utilized just eight players against the Magic. Paul George did not play for a second straight game due to foot soreness. Marcus Morris Sr. was a late scratch due to a calf contusion. Patrick Beverley (right knee soreness) and Serge Ibaka (lower back soreness) also remain out.

Newly acquired point guard Rajon Rondo (right abductor soreness) has not played for the Clippers since joining the team in a trade last week.