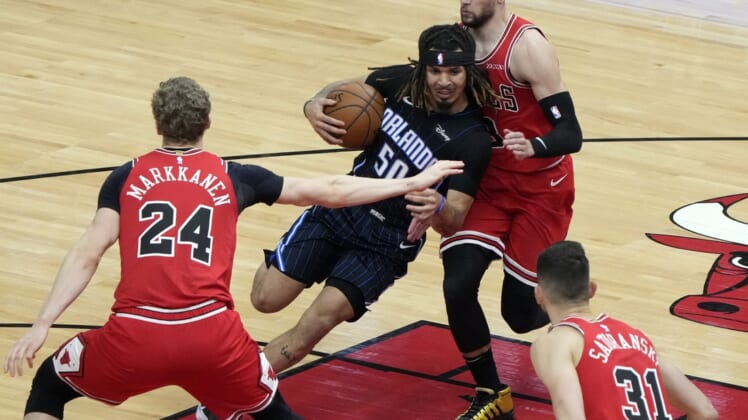 James Ennis III scored a team-high 22 points, Wendell Carter Jr. registered a double-double with 19 points and 12 rebounds, and the Orlando Magic held off a fourth-quarter Bulls rally to score a 115-106 win on Wednesday in Chicago.

The Magic led for all but the game’s early minutes, and stretched the advantage to 23 points with 10:38 remaining. The Bulls stormed back, however, pulling to within six points with 3:48 to go.

Orlando weathered 17-of-37 3-point shooting from Chicago, including 5-of-8 from former Magic Nikola Vucevic. Vucevic finished with 29 points and 11 rebounds in his 11th game since being traded to the Bulls last month.

Zach LaVine shot 6-of-12 from beyond the arc en route to a game-high 30 points for the third game of 30 or more in the last four.

Chicago is winless over that four-game stretch with Wednesday’s loss, however, while Orlando snapped its own six-game skid.

Michael Carter-Williams stepped into the passing lane and forced a steal that led to a dunk for two of his 15 points. The play pushed Orlando’s lead back to double-digits with 3:12 remaining. Ennis followed up with a clutch 3-pointer at 1:49 left to hold another potential Bulls run at bay.

Orlando also got double-figure scoring from Terrence Ross with 11 points, and 10 points from Cole Anthony. Anthony dished five assists, second among the Magic to Harris with six, as Orlando scored 29 of its 44 made field goals off assists.

The Magic also grabbed 13 offensive rebounds, led by Carter’s five, which they converted into 21 second-chance points. Orlando outscored Chicago in that regard by eight points, and held a 52-40 advantage for points in the paint.