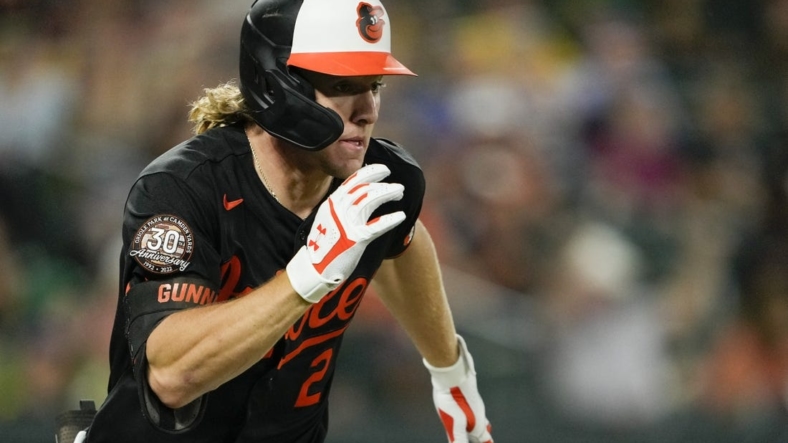 Infielder Gunnar Henderson looks to extend an impressive start to his major league career when the Baltimore Orioles host the Oakland Athletics on Saturday.

Henderson went 2-for-4 with two doubles and a run in the Orioles’ 5-2 win over the A’s on Friday night as Baltimore kicked off a 10-game homestand with its third straight win.

In three major league games, the 21-year-old rookie is 5-for-12 (.417) with a homer and two runs. In addition, after playing third base in his debut on Wednesday and shortstop on Thursday, Henderson manned second base on Friday, becoming the first Oriole to start at three different positions in his initial three games.

“Just get your feet wet, early and often,” Henderson said. “Gives me confidence going into the next games and, hopefully, my whole career.”

The Orioles, who are 1 1/2 games out of the third American League wild-card spot, broke a 2-2 tie with a three-run eighth keyed by Jorge Mateo’s two-run single that followed pinch hitter Adley Rutschman’s bases-loaded walk.

“These games, we’re playing for our lives right now and we’re playing to try to catch people,” Orioles manager Brandon Hyde said. “We’re playing important games in September. That’s never happened since I’ve been here, so that’s a lot of fun, to play the games that matter and not just try to play spoiler, but to play for yourself.”

Right-hander Austin Voth (4-2, 4.48 ERA) gets the start on Saturday, trying to continue the resurgence that began when he joined the Orioles in June in a waiver claim from the Washington Nationals. Voth is 4-2 with a 2.72 ERA in 16 games (12 starts) for the Orioles. He has struck out 51 batters and walked 19 in 59 2/3 innings.

The last time out, he took a loss against the Houston Astros on Sunday despite allowing one run over six innings. He will be making his first career appearance against the Athletics.

Oller is coming off the best outing of his short career. On Aug. 27, he tossed eight shutout innings while allowing one hit against the New York Yankees. He struck out three and walked one during a no-decision.

“Obviously against an offensive powerhouse like that, it’s really big,” Oller said. “You go into the night expecting a team like that will get their hits. It’s just a matter of minimizing and trying to work out of situations.”

On Friday night, the A’s rallied from an early 2-0 deficit and tied the game on Tony Kemp’s two-run, fifth-inning single before the Orioles pulled ahead in the eighth.

It was the third straight loss for the Athletics after they won the opener of their six-game road trip at Washington.

“This season hasn’t gone the way we wanted it in terms of wins and losses, but that hasn’t taken away from their character coming out of spring training that they were going to fight, they were going to battle until the last out is made,” Oakland manager Mark Kotsay said.