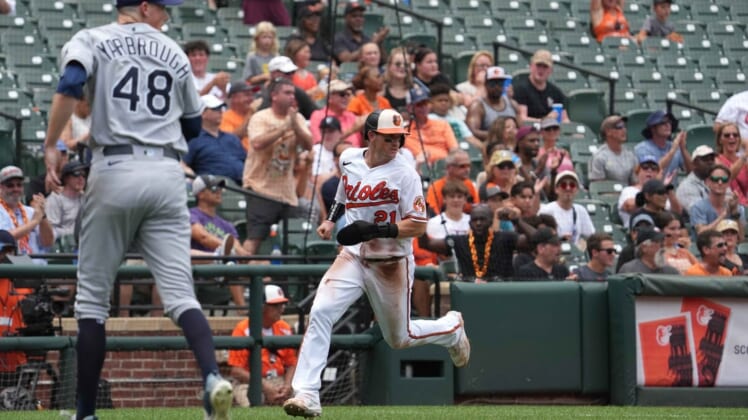 Mancini, a subject of trade talks, made what could be his last at-bat for the Orioles at Camden Yards a memorable one.

With one out and one on and the Orioles holding a 1-0 lead in the eighth, Mancini sent a high fly ball to right field. Tampa Bay’s Josh Lowe couldn’t find it in the sun and the ball deflected off him and into the right-field corner. Austin Hays scored from second and Mancini raced all they way around, beating the relay throw home for his first career inside-the-park homer.

Between innings Mancini, the designated hitter and longtime member of the Orioles, received a curtain call. The Orioles embark Friday on a six-game road trip that will extend beyond the trade deadline.

Lyles (7-8), allowed three hits and pitched around control problems as he struck out four and walked four. Felix Bautista pitched 1 1/3 innings for his third save as Orioles pitchers combined on a four-hitter.

Ryan Yarbrough (0-6) went toe-to-toe with Lyles, allowing a run on four hits over six innings. He struck out eight batters without a walk.

The Rays challenged in the eighth when Luke Raley was hit by a pitch with one out and Lowe drew a wallk from Bryan Baker. After a groundout advanced both runners , Orioles manager Brandon Hyde called on Bautista, who struck out Randy Arozarena on three pitches.

Baltimore scored in the third inning. With one out, Hays was hit by a pitch. With two outs, he stole second and scored on a double to right by Anthony Santander.

Raley’s two-out single put runners on first and third against Lyles in the first inning, but Lowe swung and missed on a 3-2 fastball.

The Rays mounted a two-out threat against Lyles in the sixth when Lowe lined a single to left and Roman Quinn walked. Cionel Perez replaced Lyles and struck out pinch hitter Arozarena.