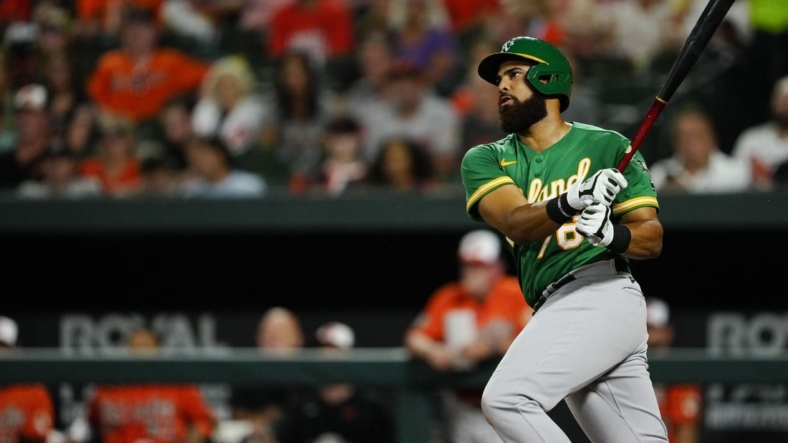 Ryan Mountcastle hit a pair of two-run homers and the Baltimore Orioles defeated the visiting Oakland Athletics 8-1 on Saturday night for their fourth straight win.

Baltimore starter Austin Voth was lifted after 70 pitches with the base loaded and one out in the fourth, and Keegan Akin (3-1) worked two scoreless innings for the win.

Vimael Machin and Cody Thomas had two hits each for the A’s, who have lost four straight.

Tony Kemp led off the game with a single against Voth and went to third on Machin’s single. Sean Murphy followed with a sacrifice fly to make it 1-0, but Voth retired the next two batters.

In the Baltimore third, Anthony Santander drew a one-out walk and Mountcastle followed with his second homer of the game and 21st of the season, a shot to right center.

The A’s loaded the bases against Voth on three singles with no outs in the fourth. Nick Allen lined out to right and manager Brandon Hyde replaced Voth with Akin, who induced a double-play grounder from Chad Pinder.

Baltimore padded its lead in the fourth when Mullins smacked his 13th homer of the season and Santander added his 25th one out later.

Adley Rutschman’s RBI-single in the sixth inning increased the Baltimore lead to 7-1.

Thomas and Nick Allen opened the Oakland seventh with a walk and a single respectively, but the A’s weren’t able to capitalize. Rutschman’s blast made it 8-1 in the eighth.