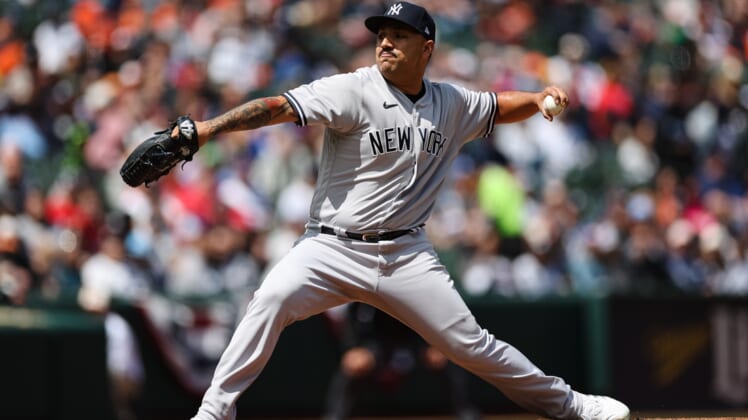 Rougned Odor and Kelvin Gutierrez each drove in two runs during a five-run eighth inning and the Baltimore Orioles beat the visiting New York Yankees 5-0 on Sunday.

The Orioles loaded the bases with two outs against Jonathan Loaisiga (0-1) before Odor entered as a pinch-hitter and broke a scoreless tie with a single to center field.

Jorge Lopez (1-1) pitched two scoreless innings for the victory. The Orioles took two of three against New York after losing 5-2 on Saturday.

Cortes allowed three hits and issued one walk before departing after allowing a leadoff single to Austin Hays in the bottom of the sixth.

The left-hander retired six batters in a row by strikeout at one point. He recorded an immaculate inning in the fourth, striking out the side on nine pitches.

Baltimore began its rally in the eighth when Ryan Mountcastle singled and Trey Mancini walked. Loaisiga retired the next two batters before walking Robinson Chirinos to load the bases, bringing Odor to the plate.

The Orioles had scored a total of 16 runs in their first eight games. The five runs scored on Sunday marked a season high.

Cortes set the tone early when he struck out the side in the second inning. He is the first Yankees pitcher to strike out 12 or more in an outing of five innings or fewer.

DJ LeMahieu had two singles for New York, which was held to four hits. Aaron Judge, Josh Donaldson and Giancarlo Stanton each struck out twice.

The Yankees, who have lost five of their last eight games, scored a total of six runs during the three-game series.