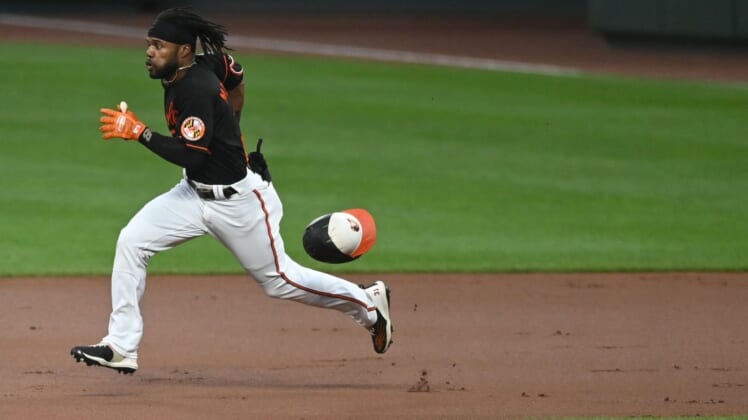 Anthony Santander and Adley Rutschman each delivered home runs among their three hits to help the Baltimore Orioles to a 15-10 win against the visiting Boston Red Sox on Friday night.

Jorge Mateo, Ryan Mountcastle and Ramon Urias also homered for the Orioles, who had seven players with multi-hit games in the opener of the three-game series.

Boston starter Kutter Crawford (3-5) was tagged for nine runs and 11 hits in 3 2/3 innings. He struck out two with no walks.

Alex Verdugo, Christian Arroyo and Rob Refsnyder had three hits each for Boston.

Enrique Hernandez gave the Red Sox a 2-0 lead with a two-out, two-run double in the second inning.

Mateo answered with a three-run homer in the bottom half of the inning to move the Orioles ahead 3-2.

Verdugo led off the third with a single and came home on a groundout by Arroyo to tie the score 3-3. Refsnyder came through with a two-out single to score another run and give Boston a 4-3 lead.

The Orioles tacked on another run in the inning on a double play to move ahead 6-4.

The Orioles hit two more home runs in scoring four runs in the fourth, all with two out, to attempt to blow the game open.

Rutschman’s two-run shot made it 8-4, and Mountcastle went deep two batters later to stretch the lead to 10-4.

Keegan Akin replaced Lyles to start the fifth, and he gave up an RBI single to Eric Hosmer, followed later by a three-run double by Tommy Pham to make it 10-8.

Verdugo then drove in Pham with a single to trim the lead to 10-9.

Baltimore got all those runs back in their half of the fifth on a solo home run by Urias, a two-run double by Santander, an RBI single by Mountcastle and an RBI double by Hays to stretch the lead back to 15-9.