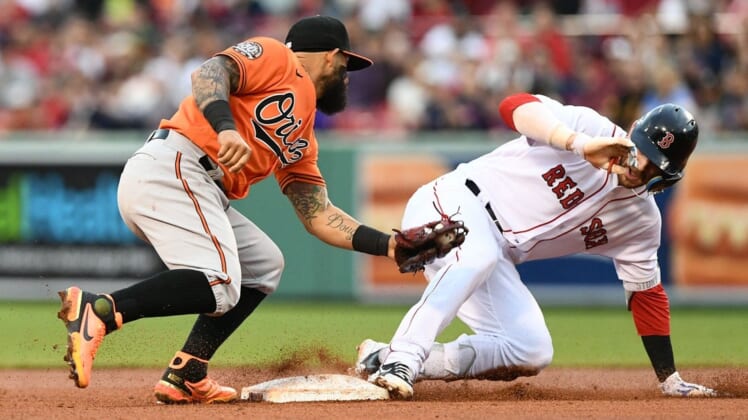 Austin Hays went 2-for-5 with a run and Ryan McKenna was 2-for-4, and Ramon Urias also drove in a run for Baltimore, which has won two of the first three in the five-game series.

Joey Krehbiel (2-3) earned the victory in relief after throwing 1 1/3 scoreless innings, allowing one hit and striking out two. Starter Denyi Reyes surrendered one run on four hits in 3 2/3 innings.

Jorge Lopez recorded the final four outs on the way to his sixth save.

Christian Vazquez was 3-for-4 and drove home Boston’s first run on a fourth-inning single, while Christian Arroyo’s fielder’s choice grounder provided another run in the ninth.

Enrique Hernandez went 2-for-4 from the leadoff spot for the Red Sox.

The Red Sox have lost two of their last three games immediately following a 7-1 stretch.

The Orioles scored their four runs on four hits in the third inning. After Hays led off with a single to center and Anthony Santander walked. Winckowski got a strikeout and a flyout, but on an 0-2 pitch, Urias dropped a two-out, two-strike single to center for the first run.

Two pitches later, Odor ripped his homer over the Boston bullpen in right-center field. It was the Baltimore second baseman’s second homer in his last five games.

Winckowski, who finished with four strikeouts, stranded four runners over the first two innings before his luck ran out. He worked around a Hays single and two walks in the opening frame.

In the fourth, Boston cut into its deficit on Vazquez’s one-out line single to center. He drove in Trevor Story, who had doubled.

Boston made it 4-2 in the ninth against Lopez. Bobby Dalbec reached on an error to begin the inning and Jackie Bradley Jr. lined a single to right. Arroyo’s fielder’s choice scored a run, but Hernandez, representing the tying run, grounded into a game-ending double play.