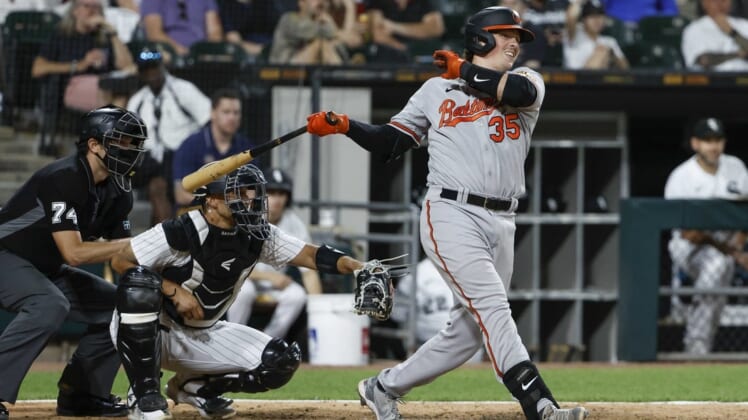 Rookie Adley Rutschman and Ryan Mountcastle will look to continue their torrid stretches on Friday night when the visiting Baltimore Orioles play the second contest of their four-game series against the Chicago White Sox.

Rutschman hit a two-run homer in the fourth inning and an RBI double in the sixth in Baltimore’s 4-0 victory in the series opener on Thursday.

“He’s a type of talent that can change the dynamic of a clubhouse when he gets hot, which he will pretty soon,” the Orioles’ Dean Kremer said of Rutschman.

Actually, Rutschman already is hot. The 24-year-old is 14-for-43 with two homers, seven RBIs and seven runs in his last 12 games.

The temperature also has been rising for Mountcastle, who recorded a pair of doubles among his three hits on Thursday. He is batting 30-for-91 with seven homers, 18 RBIs and 18 runs in his last 23 games.

Overall, Baltimore has won five of its last seven games — including the last two via shutout.

Voth, 29, made a spot start on Sunday and scattered three hits over 2 2/3 scoreless innings in a no-decision vs. Tampa Bay.

Voth has yet to face the White Sox in his career.

Chicago’s Luis Robert (leg) did not play in the series opener after being pulled in Wednesday’s 9-5 loss to Toronto.

“He’s got an issue he’s had before, so we are going to let it quiet down,” White Sox manager Tony La Russa said. “I expect he’ll play (Friday).”

Injuries are nothing new for Chicago, which likely lost utility player Danny Mendick for the remainder of the season with a torn ACL in his right knee. Outfielder Adam Engel was sent to the 10-day injured list with a strained right hamstring before the series opener.

Josh Harrison is deemed day-to-day with a right-triceps contusion after he was hit by a pitch to begin the fifth inning on Thursday. X-rays were negative for Harrison.

Kopech, 26, allowed two homers for the second time in four outings this month. He permitted four runs on a season-high seven hits in five innings of a 4-3 setback at Houston on Sunday.

“The truth is I care a lot about this game, and I want to play to the best of my ability and be the best competitor I can be every time I go out there,” Kopech said, per the Chicago Tribune. “I wasn’t any of those things (Sunday). I had to kind of be challenged with a little bit of adversity and a little bit of an emotional challenge. That got the better of me. It happens, I guess.”

Kopech has flustered the Orioles in a small sample size during his career. Although he has yet to record a decision, he has struck out all six batters he has faced in two scoreless innings of relief.