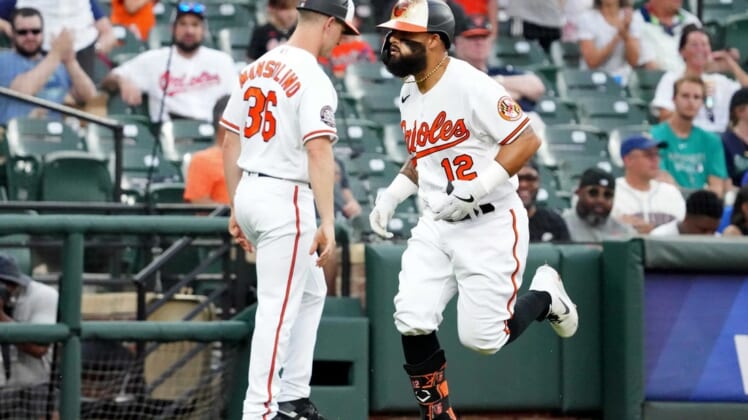 Ryan Mountcastle, Ramon Urias and Trey Mancini homered in the five-run sixth inning, when the Orioles pulled away from a two-run edge.

J.P. Crawford hit a solo homer in the fourth inning for the Mariners, who entered the game with wins in three of their past four games.

The Orioles finished with 10 hits, and it came one night after they were shut out on five hits. Seattle’s pitching staff hadn’t allowed more than two runs in any of its previous four games.

Cionel Perez (4-0) was the winning pitcher in relief, going 1 1/3 shutout innings after starter Kyle Bradish was taken out with two outs in the top of the fifth. Bradish was charged with two runs on six hits and two walks. He struck out six.

The Mariners failed in their bid to win consecutive road games since doing so to open the season at Minnesota.

Odor’s homer came after Anthony Santander doubled to begin the bottom of the second and Mountcastle walked. One out later, Odor smacked his fifth home run of the season.

Crawford’s home run to lead off the fourth, also his fifth of the season, put the Mariners on the board.

In the Seattle fifth, Taylor Trammell led off with a double and, after Ty France singled with two outs, scored on Julio Rodriguez’s infield single.

The Orioles used four hits, all for extra bases, and a walk in the big sixth inning. Sergio Romo gave up all five runs.