Orioles get off to fast start in rout of Red Sox 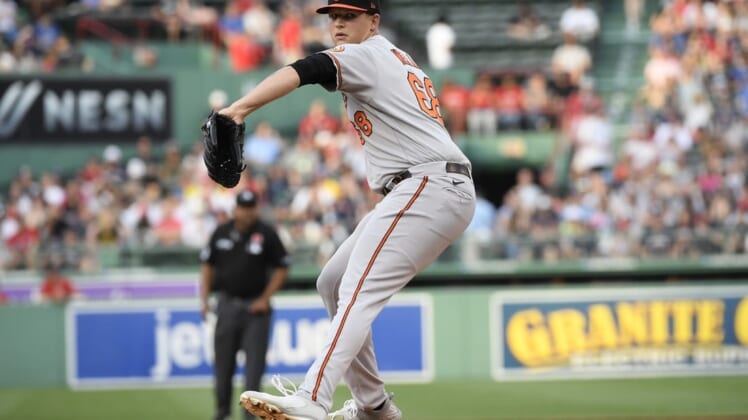 Seven different Baltimore Orioles recorded the team’s 14 hits and five crossed home plate on the way to a dominating 10-0 win over the host Boston Red Sox on Monday night.

While the offense racked up hits, Tyler Wells (2-4) put together the best start of his season by tossing six shutout, two-hit innings and striking out a pair. He retired the side in order three times in the start.

Baltimore won three of the five games in the series.

The Orioles hit two balls hard off Boston starter Rich Hill (1-3) and took a quick 2-0 lead in the first inning. After Austin Hays was hit by a pitch to begin the game, Mancini ripped a run-scoring triple high off the Green Monster in center field.

Hill then tagged out Mancini trying to score on a wild pitch, but Mountcastle doubled the Baltimore lead with a solo homer over the left-field wall.

The visitors continued adding on with two more in the third as Urias clubbed a two-run shot into the final section of Monster Seats in center. Mountcastle scored ahead after his one-out infield single.

A Mancini walk and Mountcastle’s ground-rule double started the Baltimore offense in the fifth. After Hirokazu Sawamura replaced Hill, Santander made it a 5-0 game on a sacrifice fly to right before Urias drove home another run on a grounder to third.

Starting for Boston, Hill allowed six runs on seven hits across four-plus innings. He did strike out five and walked two.

Hays doubled and Mancini singled to start Baltimore off in the seventh before Mountcastle’s double play brought home another run.

In the ninth, Mancini and Mountcastle hit one-out singles to center to set up Santander for a three-run homer toward the right-center bullpens.