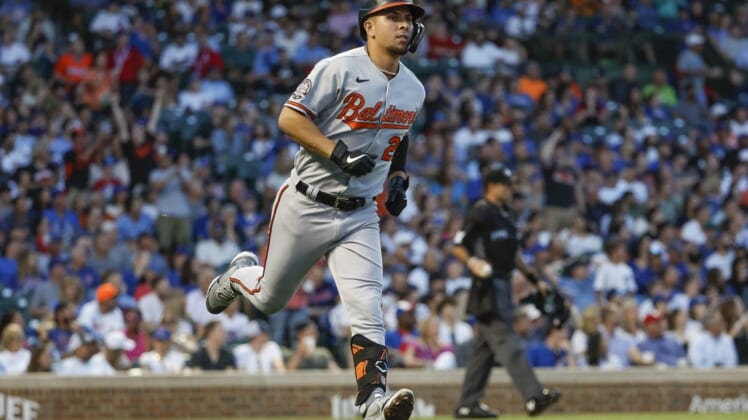 Ramon Urias belted a go-ahead homer for one of his three hits as the visiting Baltimore Orioles moved to .500 for the first time since entering Opening Day with their ninth straight victory, 4-2 over the Chicago Cubs on Tuesday night.

Cedric Mullins had two hits and two steals while Anthony Santander recorded an RBI for the Orioles, who are amid their longest single-season winning streak since a 13-game run in September 1999. After going 52-110 games in 2021, Baltimore is 44-44.

Urias matched a career high in hits and erased the Orioles’ 2-1 deficit in the fourth inning with a two-run homer well up into the left field bleachers, helping hand Chicago a fifth straight loss.

Mateo, the Orioles’ ninth-place hitter, had two hits and provided some insurance with a solo homer in the seventh.

Lyles (6-7) yielded single runs in each of the first two innings but no more. He gave up seven hits and a walk while striking out five during his third consecutive quality start for Baltimore, which has won 20 of its past 29 games.

Chicago went 8-4 while winning four straight series before being swept in a four-game road set by the Los Angeles Dodgers over the weekend, then failing to take advantage of an early lead on Monday.

Two days after being named a first-time All-Star, Chicago’s Ian Happ homered just over the right field basket in the first for a 1-0 Chicago lead. The Cubs added another in the second when Nico Hoerner doubled, stole third and scored on Afonso Rivas’ single.

Baltimore got on the board in the third. Mullins singled, went to second on a balk by Cubs starter Adrian Sampson (0-1) and came home via Santander’s two-out single to right field. After Sampson walked Adley Rutschman in the fourth, Urias belted his seventh home run.

Sampson allowed three runs on six hits and two walks in 5 1/3 innings. He struck out three.