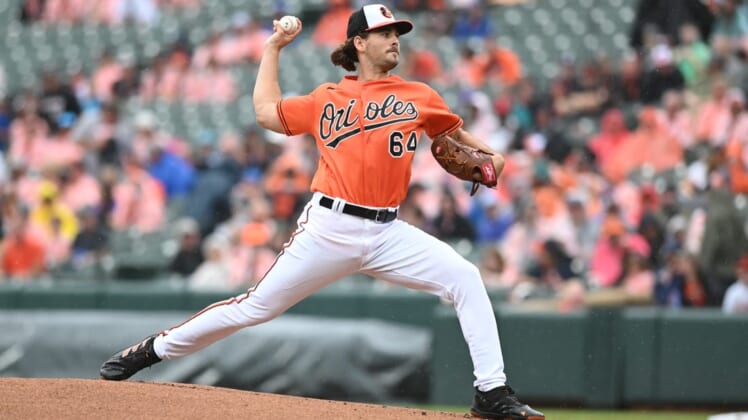 Los Angeles had at least one base runner in every inning except for the eighth. In the ninth, Michael Stefanic was hit by a pitch with one out and Andrew Velazquez stole second before the game ended on Kurt Suzuki’s line out to left field.

The Angels left eight runners on base and went 0-for-8 with runners in scoring position.

Kremer (3-1) allowed two hits, walked three and struck out seven in a sterling bounce-back performance. His outing Monday when he allowed five runs in 4 2/3 innings to the Texas Rangers snapped a string of 22 2/3 innings without allowing a run.

Bruce Zimmermann, Joey Krehbiel, Felix Bautista and Jorge Lopez worked in relief behind Kremer. Lopez’s one inning earned him his 16th save.

The Orioles got on the board when Ryan Mountcastle singled with one out in the fifth and moved to second base on a wild pitch from Sandoval (3-4) before Santander’s single to left field.

Luis Rengifo had two hits for the Angels. He led off the seventh with a double off Krehbiel and moved to third on Suzuki’s flyout. But Brandon Marsh struck out and Jonathan Villar grounded out to end the threat.

An inning earlier, Los Angeles had runners on the corners after one-out singles from Taylor Ward and Jared Walsh. Stefanic then grounded into a double play.

Mike Trout’s double-play grounder in the fifth nixed that chance after Marsh walked and moved to second on Villar’s sacrifice bunt.

Three of the first six results in the winning streak came with walk-off victories before Saturday’s tense game.