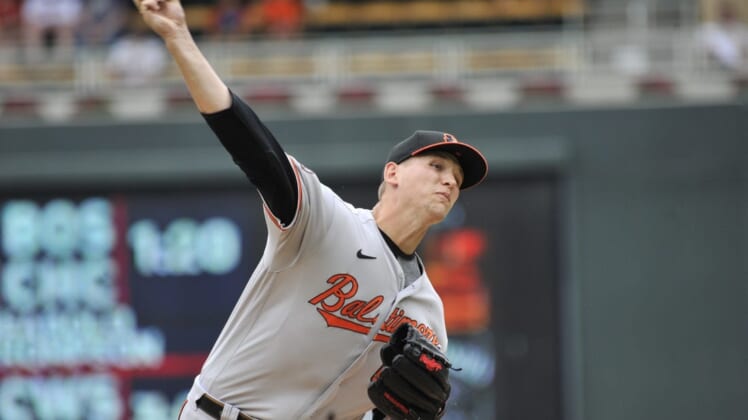 The Baltimore Orioles will look to equal their longest winning streak in nearly two years when they host the Los Angeles Angels on Friday.

The Orioles, who opened the four-game set with a 4-1 win on Thursday, have won five in a row for the first time since winning six straight from Aug. 7-13, 2020.

Baltimore has reason to be optimistic it will continue its winning ways since it will send right-hander Tyler Wells (7-4, 3.09 ERA) to the mound on Friday.

Wells is coming off a stellar outing on Sunday against the host Minnesota Twins. He allowed a run on three hits with seven strikeouts and a walk over six innings in a 3-1 win.

The 27-year-old right-hander, who has won his past five starts and his past six decisions, has played a major role in the Orioles’ turnaround this season. Baltimore has won each of his past seven starts.

Wells has pitched four scoreless and hitless innings spanning three appearances as a reliever against the Angels in his career, with all of those outings occurring last year.

The Orioles took two out of three games when the teams met in Anaheim from April 22-24, and the teams are currently headed in opposite directions.

“Just the energy and the chemistry we have on this team on and off the field is really something else,” Orioles right fielder Anthony Santander said through a translator in his postgame interview. “It’s been a big reason we’ve been so successful all year long.”

Los Angeles will recall left-hander Reid Detmers (2-3, 4.66 ERA) from the minors to make the start. He was sent to the minors after allowing nine runs on nine hits, including four home runs, with 12 strikeouts and five walks in 8 2/3 innings in his previous two starts combined last month.

In his lone career appearance against the Orioles, Detmers allowed two runs on three hits with four strikeouts and a walk in five innings during a 5-3 loss on April 22.

Detmers is replacing Michael Lorenzen, who was placed on the injured list on Thursday due to a strained right (pitching) shoulder. He will undergo an MRI exam to determine the extent of the injury.

Detmers struggled after throwing a no-hitter against the Tampa Bay Rays on May 10 and was demoted to Triple-A Salt Lake last month to work on his slider. He had 14 strikeouts, including a stretch when he fanned seven straight hitters, in six innings in his lone minor league start June 30.

“We went back and looked at some video and saw this little tweak and mechanics that somehow formed over the past offseason, I guess,” Detmers said. “And so we fixed that. Got back to normal. And then once I did that, the slider came back. Everything is right where I need it to be.”

Every Oriole in the starting lineup reached safely in the series opener, with Santander leading the way by going 2-for-4 with a run.

The Angels, who got two hits from Jonathan Villar, were 0-for-7 with runners in scoring position on Thursday.