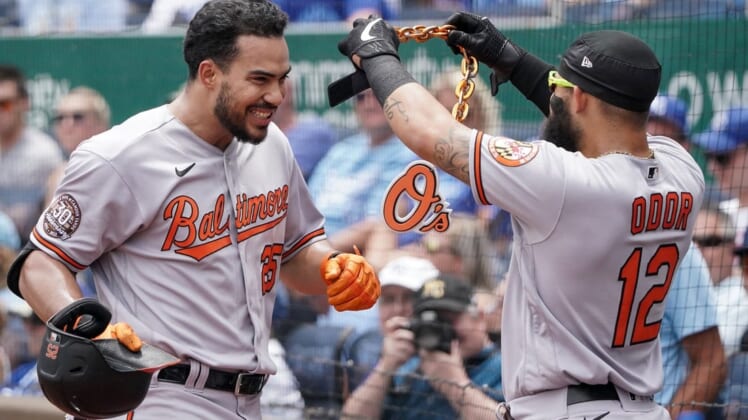 Anthony Santander, Ryan Mountcastle and Rougned Odor each hit solo home runs and Dean Kremer allowed one earned run over five innings as the Baltimore Orioles split a four-game series with the host Kansas City Royals with a 10-7 win on Sunday.

Santander went 2-for-6, drove two runs and scored one and Mountcastle added two hits, an RBI and two runs to back right-hander Kremer (1-1), who allowed four hits to go along with two strikeouts and two walks.

After taking a 1-0 lead during the first inning when Santander blasted a 455-foot home run to right-center field, the Orioles broke it open with a four-run second inning against Royals right-hander Brad Keller (1-8).

After back-to-back solo home runs by Mountcastle and Odor, Tyler Nevin walked and advanced to third on Martin’s single.

Mullins’ single scored Nevin and advanced Martin to second before Hays capped the four-run inning three batters later, when his single to right scored Martin to make it 5-0.

Hays’ single ended Keller’s day. He was relieved by Joel Payamps after allowing five runs on seven hits with four strikeouts and a walk in 1 2/3 innings.

The Orioles pushed their lead to 6-0 in the fourth when Mullins scored on Hays’ fielder’s choice. They made it 7-0 in the sixth when Santander’s infield single with two outs scored Martin, who had led off with a triple.

The Royals pulled to within 7-1 in the sixth. Witt scored from first when Martin’s double-play throw to second base sailed into right field.

Keegan Akin relieved Kremer after Martin’s error and gave up a two-run homer to Dozier, pulling the Royals to within 7-3.

The Orioles tacked on three in the seventh on Martin’s two-run triple and Mullins’ run-scoring single to make it 10-3, before solo homers by Michael A. Taylor and Witt cut the lead to five in the bottom of the inning.

The Royals pulled to within 10-7 in the eighth on a run-scoring single by Emmanuel Rivera followed by Taylor’s RBI groundout.

Baltimore’s Cionel Perez pitched around a hit and a walk in the ninth inning for his first career save.