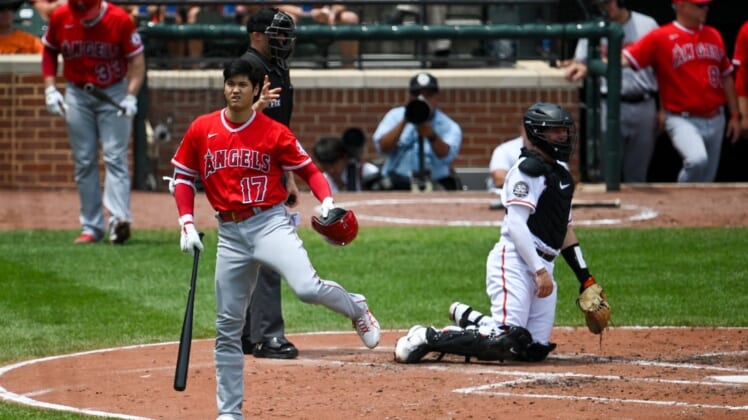 The Baltimore Orioles, who were widely expected to post one of baseball’s worst records at season’s outset, moved within a game of .500 by capping a four-game sweep of the visiting Los Angeles Angels with a 9-5 win on Sunday.

The Angels took a 2-0 lead in the third on Monte Harrison’s two-run homer to right that scored Michael Stefanic, who led off the inning with a single.

Jose Suarez was cruising on the mound for the Angels for the first three innings before running into trouble in the fourth.

The left-hander retired the first 10 batters he faced before hitting Trey Mancini with a pitch and giving up Ryan Mountcastle’s run-scoring double.

After Suarez issued consecutive walks to Anthony Santander and Adley Rutschman to load the bases, Ramon Urias singled to center to score Mountcastle and Santander for a 3-2 lead. After Ryan McKenna struck out, Rougned Odor capped the four-run frame with a two-out single to score Rutschman.

Suarez (1-3) allowed four runs on three hits with a strikeout and two walks in 3 2/3 innings.

The Orioles extended their lead to 8-2 in the fifth, as Santander’s run-scoring double, a passed ball, reliever Elvis Peguero’s wild pitch and Urias’ single to right each plated a run during the four-run outburst.

Austin Voth (1-1) allowed two runs on four hits with six strikeouts and no walks in five innings to pick up the win.

Max Stassi’s two-run homer to center in the eighth provided the final margin.

Harrison went 2-for-4 with three RBIs and a run and Stefanic went 2-for-2 with a run and two walks for the Angels, who went 1-8 during their nine-game road trip.