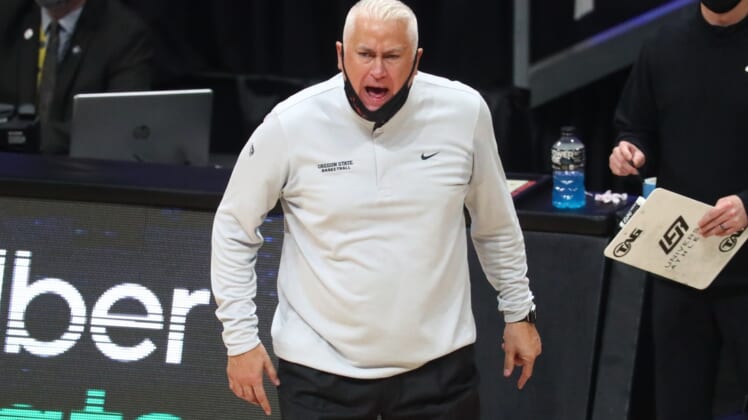 David Jenkins Jr. bombed in five 3-pointers to account for a majority of his team-high 22 points for the Utes (8-5, 1-2), who were beaten by Oregon State for a fifth straight time.

Lucas and Dashawn Davis combined for 25 points in the first 20 minutes, during which the Beavers used 62.5 percent shooting to go up by as many as 14 points en route to a 47-38 advantage at the break.

Seeking a second straight win, Utah chipped away at the deficit throughout the second half, getting within 52-51 at one point and later 63-60 on Jenkins’ fifth 3-pointer with 11:22 to play.

But Oregon State had an answer each time, including Glenn Taylor Jr.’s 3-pointer 32 seconds after Jenkins’ hoop to create some breathing room.

A layup by Lazar Stefanovic kept Utah alive at 76-69 with 3:39 to go, and even though the Utes held the Beavers without a point for almost three minutes, the visitors didn’t score again until just 1:17 remained.

Warith Alatishe provided 16 points and five steals for the Beavers, while Roman Silva had 12 points and a team-high-tying six rebounds, Davis 13 points and a game-high eight assists, and Dexter Akanno 10 points.

Jenkins hit five of his eight 3-point attempts, helping the Utes outscore the hosts 36-18 from beyond the arc.