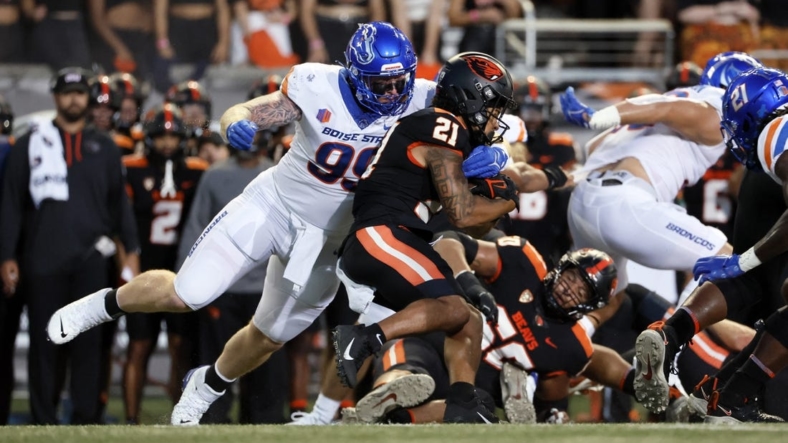 Chance Nolan passed for 251 yards and two touchdowns as Oregon State cruised to an easy 34-17 victory over Boise State on Saturday night in the season opener for both teams at Corvallis, Ore.

Team captain Jack Colletto rushed for a long touchdown on offense and recovered a fumble on defense for Oregon State while Jaydon Grant recorded an interception and also had a strip-sack for the Beavers.

Luke Musgrave and Tyjon Lindsey caught touchdown passes, and Deshaun Fenwick rushed for a score for Oregon State. Rejzohn Wright and Alex Austin also had interceptions for a defense that forced five turnovers.

Nolan completed 14 of 23 passes and was intercepted twice for the Beavers, who scored the game’s first 24 points and won their seventh consecutive home contest.

Boise State quarterback Hank Bachmeier was pulled after throwing two interceptions and losing a fumble in the first 18 minutes. He completed 4 of 8 passes for 30 yards. Replacement Taylen Green was 19-of-28 passing for 155 yards and one interception but rushed for 102 yards and two touchdowns.

The Broncos recovered to pull within 27-17 early in the fourth quarter after Green’s touchdown runs of 74 and 4 yards. Colletto then lined up at fullback and broke loose on a 41-yard touchdown run with 10:39 left to turn the momentum back to the Beavers.

Grant’s interception set up Oregon State’s first touchdown. Nolan immediately hit Tre’Shaun Harrison for 26 yards and followed up with a 27-yard touchdown to Musgrave with 5:24 left in the first quarter.

Just over four minutes later, Nolan tossed a 47-yard scoring pass to Lindsey to make it 14-0.

Early in the second quarter, Grant sacked Bachmeier and forced the fumble with Colletto recovering at the Broncos’ 6-yard line. That set up Everett Hayes’ 20-yard field goal with 10:28 left in the half.

Boise State threatened to get on the board but Ashton Jeanty fumbled with Grant recovering at the Oregon State 4 with 4:44 left.

The Beavers cashed in with a four-play, 98-yard drive. Nolan’s 74-yard pass connection with Anthony Gould set up the touchdown and Fenwick scored from the 12 to make it 24-0 with 3:11 left.

Jonah Dalmas’ 41-yard field goal with 12:11 left in the third quarter put the Broncos on the board. Hayes kicked a 23-yard field goal to restore the 24-point advantage with 2:57 remaining in the stanza.