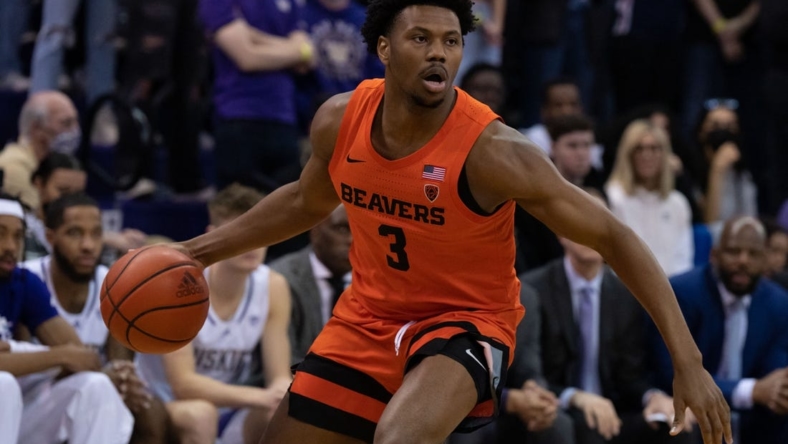 This season is certainly looking better than the last for Oregon State.

The Beavers (2-0) can match their victory total from the entire 2020-21 campaign when they play host to NAIA program Bushnell on Tuesday night in Corvallis, Ore.

Oregon State, which made a surprise run to the Elite Eight of the NCAA Tournament two seasons ago, followed that up by going 3-28 last season.

They have shown to be a better second-half team thus far.

The Beavers rallied from a 16-point halftime deficit against the Golden Hurricanes, then pulled away after leading the Rattlers just 22-17 at the break.

“It shows us if we pull together, stick to our discipline and never get too down or too high, always trust each other and trust the system coach (Wayne) Tinkle put in, we can fight back from anything,” said freshman Jordan Pope, who shares Oregon State’s scoring lead with Dexter Akanno at 16.5 points per game.

Tinkle admitted to having a few choice words for his players at halftime of the opener.

“Then our guys responded in the second half to doing it our way,” Tinkle said. “This is a resilient group. We knew they had it in them, and we just had to get them to that place.”

Luke Smith leads the Beacons with an average of 17.3 points per game, while Spencer Hoffman is putting up 11.8 and 9.8 rebounds per contest. Smith and Kaden Sand shared team-high scoring honors against Grace with 13 points apiece.

“This has been a great trip to find out where we are as a team,” Bushnell coach Eddie Alexander said in a statement. “We now know exactly what we need to do to be a (NAIA) national tournament team. We have the skill, we just have to put it together defensively for an entire 40 minutes.”

Due to NCAA/NAIA rules, this will be a regular-season game for the Beavers but an exhibition for Bushnell.