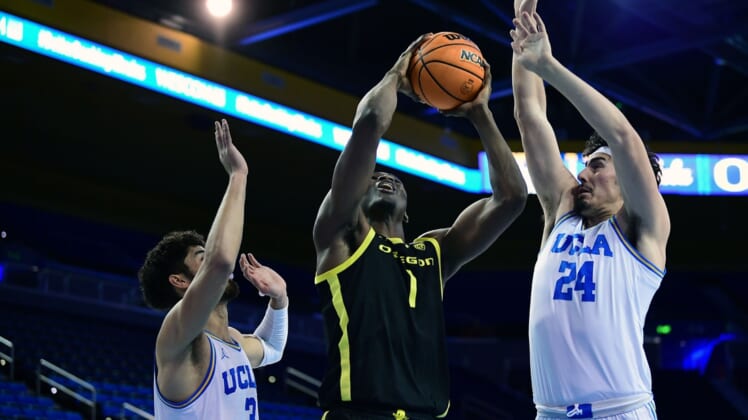 Jacob Young scored 19 of his 23 points after halftime to help Oregon record an 84-81 overtime victory over No. 3 UCLA in Pac-12 play on Thursday night in Los Angeles.

Oregon coach Dana Altman recorded his 700th career victory. His 33-year career includes one season at Marshall, four at Kansas State and 16 at Creighton prior to his 12-year tenure with the Ducks.

Young’s basket with 2:30 to play in OT gave the Ducks an 81-79 lead. UCLA’s Jaime Jaquez Jr. missed two free throws with 46.5 seconds left, and Young followed with a basket with 20.5 seconds remaining to push the lead to four.

Myles Johnson scored on a putback with 10.3 seconds to go to bring UCLA within two. Richardson split two free throws with 9.1 seconds remaining, and Juzang and Bernard each missed 3-point attempts in the final seconds.

Oregon led 73-67 in the final minute of regulation before the Bruins scored six straight points in less than 20 seconds to force overtime.

Juzang made two free throws with 36.5 seconds remaining, and Campbell hit two with 20.5 seconds left as the Bruins pulled within 73-71. After receiving the inbounds pass, Young threw a pass toward a teammate stationed under his own basket and UCLA’s Jaylen Clark intercepted it and laid in the tying basket with 16.7 seconds left.

Tyger Campbell and Peyton Watson scored 10 points apiece for the Bruins, who shot 39.7 percent and made just 7 of 25 from behind the arc.

Quincy Guerrier scored 11 points and Eric Williams Jr. and De’Vion Harmon added 10 apiece for the Ducks, who shot 42.9 percent from the field and were 6 of 19 from 3-point range.

The Ducks scored the final four points of the first half as the start of a 20-2 surge. Williams made two 3-pointers and Young and Richardson each hit one as Oregon took a 46-37 advantage with 16:07 remaining in the contest.

The Bruins responded with a 14-4 run and took a 51-50 edge on Campbell’s 3-pointer with 11:39 left before Oregon led most of the remainder of the contest.