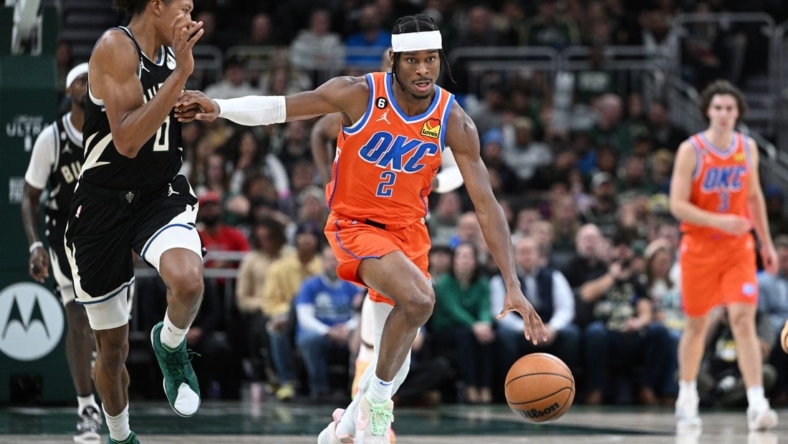 The Oklahoma City Thunder might be expected to be demoralized following four straight losses, but that’s hardly the case heading into the team’s home game against the Toronto Raptors on Friday.

The league’s youngest team remained optimistic even after Wednesday’s 136-132 double-overtime loss to the Milwaukee Bucks.

Rising star Shai Gilgeous-Alexander scored a season-high 39 points to lead the Thunder, who rallied from a 12-point deficit with just under five minutes remaining to force overtime.

“It just shows the toughness of everybody on the staff,” Oklahoma City guard Tre Mann said. “It shows how bad everybody wants to compete and win.”

Mann scored 21 points off the bench in the loss while guard Josh Giddey had 18. Forward Aleksej Pokusevski also continued to impress with 17 points and 10 rebounds.

After opening the season with three straight losses, Oklahoma City won four straight before dropping four in a row. Despite falling short in Wednesday’s marathon loss, the Thunder proved their mettle against the team with the league’s best record in Milwaukee (10-1).

“It’s hard to complain with the effort,” Oklahoma City coach Mark Daigneault said. “Obviously we didn’t win the game, but the effort was there.”

The Thunder have another tough matchup against Toronto, which improved to 7-5 with a 116-109 win over the Houston Rockets on Wednesday.

Anunoby has emerged as one of the league’s top defensive players with three or more steals in a career-high six consecutive games.

“He’s finally taking it personally, and if he ever gets any meaner, he’s going to be really scary,” VanVleet said. “He’s such a nice guy. If he ever just turns into a bad guy it would be scary out there. To see him take it personal on defense, he could probably steal the ball whenever he feels like it, but he’s making the right reads on rotations, he’s making plays on lobs and blocked shots. It just looks great.”

Anunoby is assuming a greater role in place of Pascal Siakam, who is out with a strained right adductor muscle and expected to miss at least two weeks.

Toronto also will be without Precious Achiuwa indefinitely. The third-year forward exited Wednesday’s game in the fourth quarter because of a right ankle injury, and on Thursday the team announced he suffered partially torn ligaments in the ankle.

The Raptors received a spark on Wednesday from veteran forward Otto Porter Jr., who missed the team’s first seven games due to a hamstring injury and personal reasons.

Playing in just his fifth game, Porter had 14 points in a season-high 23 minutes off the bench against Houston.

“I was gassed — I really was,” Porter said. “But it’s a process trying to get my legs and my rhythm back.”

Toronto’s offense continues to run through VanVleet, who made a season-high seven 3-pointers against the Rockets.

VanVleet is averaging 29.7 points over his past three games while shooting 46.3 percent from the field and 46.2 percent from beyond the arc.

Friday’s matchup features two of the league’s hottest shooters in VanVleet and Gilgeous-Alexander, who has scored 30-plus points in seven of his first 10 games.