One win away, Astros lean on Framber Valdez to deliver vs. Phillies 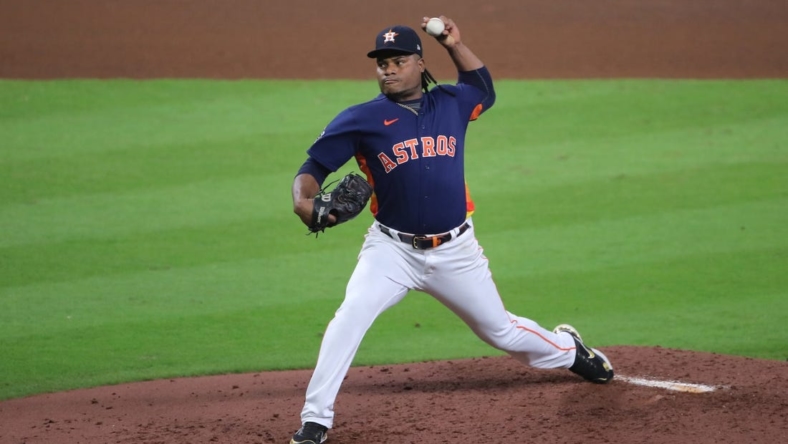 HOUSTON — Much has been made of Houston Astros left-hander Framber Valdez maximizing his abundant talent by utilizing and applying several mental processes to sharpen his focus.

The results for Valdez have been irrefutable, and Houston will look for Valdez (2-0, 1.42 ERA this postseason) to deliver one more quality start on Saturday against the Philadelphia Phillies in Game 6 of the World Series, with the Astros leading the best-of-seven series 3-2 and on the brink of securing their second championship in five years.

Excitement isn’t in short supply. After Cristian Javier pitched brilliantly and combined with three relievers for a no-hitter in Game 4, Justin Verlander produced an inspired effort in Game 5, grinding his way through five innings of one-run ball despite steady traffic on the bases against the backdrop of a frenzied crowd. If Valdez needs inspiration, his short-term memory would suffice.

“Yeah, definitely helps a lot,” Valdez said. “It helps for me to stay positive. Obviously, our guys did an amazing job. We won two games (in Philadelphia) as well. I think that does help set the tone.

“Obviously, we’re going back home just needing to win one game. And hopefully with God on our side, we’ll be able to win that game.”

The Phillies’ powerful lineup has been stifled by the Astros’ pitching ever since Philadelphia bashed five home runs in Game 3 to slug its way to a 2-1 series lead. The Phillies mustered just two at-bats with runners in scoring position while being no-hit in Game 4, and they finished 1-for-7 with runners in scoring position in Game 5, that hit coming from Jean Segura in the eighth inning.

The Phillies are slashing .174/.272/.342 in the series, and while their power remains a looming threat, their inability to mount and sustain rallies is part of the reason why they sit one game from elimination. At this juncture, the Phillies are hopeful that familiarity with Valdez will pay dividends as Game 6 will mark the third time they’ve faced him since Oct. 5.

Before carrying a shutout into the seventh inning and posting nine strikeouts in Game 2, Valdez recorded 10 strikeouts and limited the Phillies to two hits over five scoreless innings in the regular-season finale last month.

“I think that goes for everybody,” Phillies manager Rob Thomson said of the benefit of facing a pitcher multiple times. “I think the more you see a pitcher, the more you see the shape of his pitches and see it up close and how the fastball sinks or rides, I think you have a better chance.

“I thought we had better at-bats in the World Series start than we did in the regular-season start. So hopefully that continues.”

What the Phillies can’t afford to have continue is the Astros’ sudden momentum. Houston appeared on the ropes when the Phillies fashioned a blowout victory in Game 3, only to rebound behind Javier and the combined no-hitter. Now the onus falls on Wheeler to make an old baseball axiom manifest, his primary purpose to keep the Phillies’ title hopes alive.

“I think (momentum) resets day to day,” said Wheeler, whom the Astros tagged for five runs (four earned) on six hits and three walks in five innings in Game 2. “I think everybody probably feels — has their own beliefs, I guess they could say. But I think it resets, especially with a starting pitcher.

“From my standpoint, I’m just going out there and pitching my game and starting new.”